Greece releases one of eight putschist officers linked to FETÖ 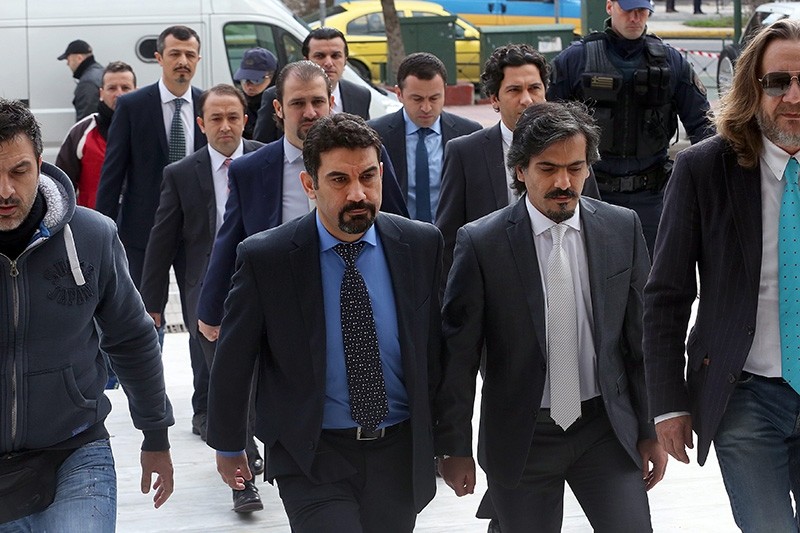 Fugitive FETu00d6 soldiers are escorted by Greek Police officers out of the Supreme Court in Athens, Greece, 23 January 2017 (EPA File Photo)
by Daily Sabah with Agencies Apr 19, 2018 12:00 am

Greece's top administrative court yesterday ordered the release of Süleyman Özkaynakçı, one of eight putschist officers who fled there after they failed to seize power in Turkey on July 15, 2016, on behalf of the Gülenist Terror Group (FETÖ).

The Council of State's rulings on the remaining suspects have not been issued yet but it is likely that they would be released as well. The court has imposed severe restrictions on the movements of Özkaynakçı, while he waits for a decision on his asylum application.

The Council of State ruled that the officer will remain at an undisclosed address, must appear daily at a local police station and cannot obtain travel documents until his asylum application is determined in May. Courts had initially granted him asylum but suspended the decision following a Greek government appeal. The suspects would be released next month anyway when the maximum detention period of 18 months expires.

After the July 15 coup attempt, eight soldiers - two commanders, four captains and two sergeants - escaped to Greece on a Sikorsky helicopter and landed in Alexandroupolis. Following their landing, the eight suspected FETÖ members asked for asylum from Greek authorities. Before their asylum request was taken to court, a Greek court sentenced the eight men to a suspended two-month jail sentence for illegal entry into Greece. The Turkish government formally requested that Greece extradite the FETÖ members, who are accused of being behind the coup attempt, to face trial in Turkey.

Greece rejected Turkey's third extradition request for the eight soldiers in March. The Greek appeals court handling the case ruled that the suspects would not get a fair trial in Turkey if extradited.

The officers are wanted in connection with their role in the coup attempt's Istanbul leg. When the coup attempt failed, they fled the headquarters of the 66th Mechanized Infantry Brigade in the city where they were deployed. The military base served as the meeting place of for a group of putschist officers who are accused of gathering there two days before the attempt to discuss the details. Four people, including Col. Sait Ertürk, were killed at the same base in a clash with pro-coup troops. Turkey earlier condemned rulings not to extradite coup suspects as "politically motivated."

In January, Greek Justice Minister Stavros Kontonis said that Greece could try eight suspects for crimes they committed abroad. The two countries, which recently sought to improve their relations with a past tainted by hostilities, has agreements in place in the fight against terrorism.

Due to its location at the gateway of Europe, Greece has been a popular destination both for migrants and fleeing FETÖ suspects after Turkey escalated a crackdown on the terrorist group in the wake of the putsch attempt. Turkish border security has stopped dozens of FETÖ suspects on the land border with Greece, while the Turkish Coast Guard has prevented a large number of the group's members from fleeing aboard boats to Greek islands from nearby Turkish shores since the summer of 2016.