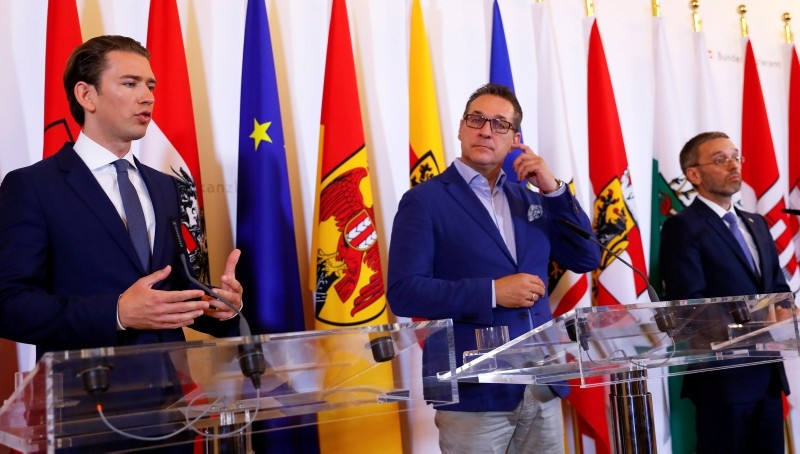 The Austrian government's decision to shut down seven mosques and potential expulsion of up to 60 Turkish imams drew the ire of Ankara, which said that it is the outcome of an ongoing "anti-Islam, racist and discriminatory populist wave."

Austria's right-wing government said Friday that it is closing seven mosques and plans to expel imams in a crackdown on "political Islam" and foreign financing of religious groups.

Chancellor Sebastian Kurz said the government is shutting a Turkish nationalist mosque in Vienna and dissolving a group called the Arab Religious Community that runs six mosques. Six other mosques are being closed down, three in Vienna, two in Upper Austria and one in Carinthia.

Images that emerged in April of children in the Turkish-backed mosque playing dead and reenacting the World War I battle of Gallipoli had previously caused controversy. The photos of children, published by the Falter weekly, showed the young boys in camouflage uniforms marching, saluting, waving Turkish flags and then playing dead. Their "corpses" were then lined up and draped in the flags.

The actions by the government are based on a 2015 law that, among other things, prevents religious communities from getting funding from abroad. Interior Minister Herbert Kickl of the far-right Freedom Party (FPOe), the junior partner in Austria's coalition government, said Friday the residence permits of around 60 imams employed by ATIB (Austria Turkey Islamic Union), a group that oversees Turkish mosques in Austria, are being reviewed because of concerns about such financing.

"The circle of people possibly affected by these measures - the pool that we're talking about - comprises around 60 imams," Kickl said, adding that a total of 150 people risked losing their right to residence.

ATIB is an independent organization but receives personnel from Turkey's Presidency of Religious Affairs (Diyanet).

ATIB itself condemned the photos at the time, calling the "highly regrettable" event and said that "called off before it had even ended."

Turkish Presidency Spokesperson Ibrahim Kalın harshly criticized the decision through Twitter posts on Friday, saying: "Austria's decision to close seven mosques and expel imams is a reflection of the Islamophobic, racist and discriminatory wave in this country. It is an attempt to target Muslim communities for the sake of scoring cheap political points."

"The Austrian government's ideologically charged practices are in violation of universal legal principles, social integration policies, minority rights and the ethics of co-existence. Efforts to normalize Islamophobia and racism must be rejected under all circumstances," he added.

The Turkish Foreign Ministry has criticized Austria's decision on Friday with a written statement saying that the normalization of anti-Islam and racism in such ways, needs to be rejected.

The statement said that the efforts of Austrian politicians particularly Chancellor Kurz, aiming to obtain political interests from such incidents is condemned. The statement also said that the decision contradicts the recent efforts from both foreign ministries to normalize ties.

However other European far-right leaders welcomed the announcement.

Marine Le Pen, the leader of the French Front National, said on Twitter: "Austria is taking things in hand and showing that 'when you want to, you can!'"

Matteo Salvini, head of Italy's League and interior minister in the new government, also tweeted his approval, saying: "Those who exploit their faith to endanger a country's security should be expelled!"

Kurz, who leads the center-right People's Party (OeVP), became chancellor in December in a coalition with the anti-migration and far-right Freedom Party. Both the OeVP and the FPOe made immigration and integration major themes in their election campaigns. The topic had been pushed up the political agenda by the migrant crisis of 2015-16, which saw more than 150,000 people seek asylum in the country of 8.7 million.

In campaigning for last year's election, both coalition parties called for tougher immigration controls, quick deportations of asylum-seekers whose requests are denied and a crackdown on radical Islam. The government recently announced plans to ban girls in elementary schools and kindergartens from wearing headscarves, adding to existing restrictions on veils.

"Parallel societies, political Islam and tendencies toward radicalization have no place in our country," Kurz told reporters in Vienna. He added that the government's powers to intervene "were not sufficiently used" in the past.

Friday's measures are "a first significant and necessary step in the right direction," said Vice Chancellor Heinz-Christian Strache, the Freedom Party's leader. "If these measures aren't enough, we will if necessary evaluate the legal situation here or there."

Worshippers arriving for Friday prayers were met with a sign on the door reading "closed" in Turkish and German.

Kursant, a 26-year-old, told AFP: "I've been coming to this mosque frequently since I was a child, I've had lessons here, I've never heard anyone at the mosque, any of the employees, express any Salafist opinions. That's laughable."

Turkey's relations with Austria have long been strained, with Kurz calling on the European Union to break off negotiations on Ankara joining the bloc.

"He's throwing his weight around and making a scene," Erdoğan went on.