Erdoğan: EU must decide on Turkey membership, no more time should be wasted 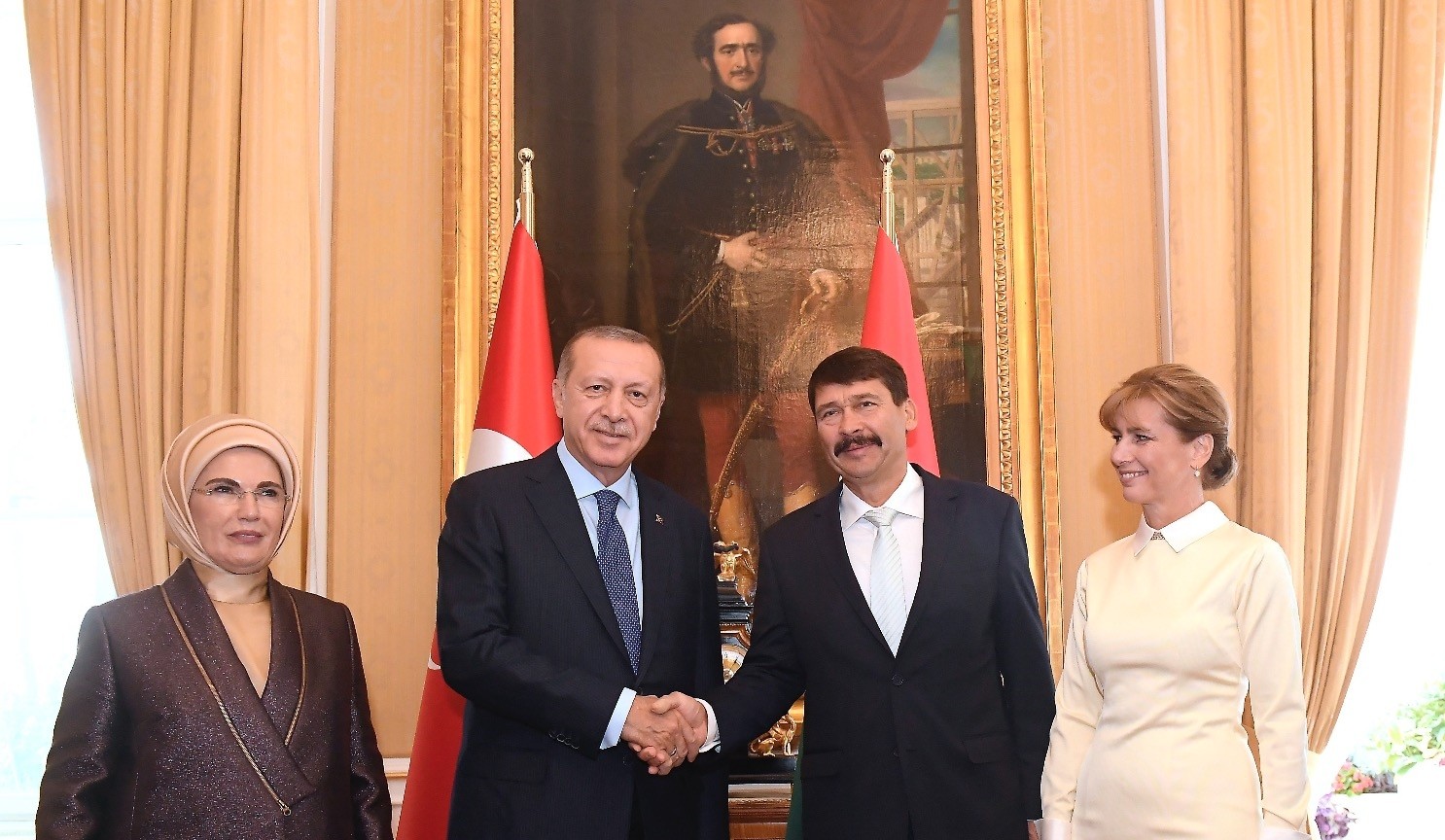 President Recep Tayyip Erdou011fan shakes hands with Hungarian President Janos Ader as their wives Emine Erdou011fan (L) and Anita Herczegh (R) look on during their meeting at the presidential Alexander Palace in Budapest, yesterday.
by daily sabah
Oct 09, 2018 12:00 am

Turkey's patience has reached its limit, President Erdoğan said, referring to the EU membership process of the country which has been ongoing since 1963, longer than any other country that has applied for the membership in the union

President Recep Tayyip Erdoğan said yesterday that the time has come for the European Union to decide on Turkey's accession process and that no more time should be wasted.

"It was 1963 when the negotiations started and it is 2018 now. This type of cruelty has not been done to any other candidate countries," Erdoğan said during his press conference with Hungarian Prime Minister Victor Orban in Budapest.

Turkey and the EU have signaled a period of normalization in ties recently.

There have also been positive remarks made by Turkish and some EU officials, who have displayed their willingness to restore ties.

Erdoğan said, however, that Turkey is not willing to wait around for a membership decision to be made by the EU any longer.

"Hungary's support for Turkey's EU accession process is important for us," Erdoğan said during the press conference.

"Right now, there are about 3.5 million Syrian and about 500,000 Iraqi refugees in Turkey," Erdoğan said. He also reiterated the call for EU countries to share the burden of the refugees in the country. "Some 250,000 people have returned to [northern Syria's] Jarablus, Afrin and al-Bab, and more than 60,000 to Idlib [in northwestern Syria]," the president also said.

"Hungary's security depends on stability in Turkey," Orban said during the press conference and added that his country's support to Turkey in the fight against terrorism was also "important." "Turkey's refugee deal with EU holds great importance for the continent's security," Orban also added. The president also expressed appreciation for Hungary's support in Turkey's fight against the Gülenist Terror Group (FETÖ) and its solidarity following the July 15, 2016 coup attempt, where 250 people were killed and more than 2,200 were injured.During his first official visit in 5 years, Erdoğan said that the two countries had the opportunity to discuss all aspects of their bilateral relations.

Praising the cultural and historic ties between the two countries, Erdoğan said these strong ties extend into the political and economic realms as well. The Turkish president received a warm welcome from his Hungarian counterpart Janos Ader and Hungarian first lady Anita Herczegh in capital Budapest and later met with Orban in Hungarian National Assembly, where he was also scheduled to meet Hungarian Parliament Speaker Laszlo Kover.

Erdoğan and Orban were seen having a warm chat with accompanying officials on the balcony of Hungary National Assembly, across from the Danube River.

During the bilateral meetings between the Turkish and Hungarian delegates, Erdoğan and Orban also discussed Turkey's EU accession process, the refugee issue and recent Syria developments.

Erdoğan is also expected to officially inaugurate the restored Tomb of Gül Baba in Budapest, attend a business forum with Orban and pay a visit to the Budapest Turkish Memorial Cemetery.

During the press conference, Erdoğan also thanked the Hungarian officials for their support in the renovation of the Gül Baba tomb in Budapest.

Ankara and Budapest enjoy friendly relations based on historical and cultural ties, membership in the NATO alliance, and close cooperation within international organizations, especially the EU and the Council of Europe, and Hungary's support for Turkey's EU membership.

Thanks to the high-level visits and several consultation mechanisms, bilateral relations have been intensified in many areas including politics, economy and trade. Moreover, Hungary is one of the countries that support Turkey's EU membership. The two countries also have strong historical and cultural ties.

The Turkish International Cooperation and Development Agency (TİKA) and the Yunus Emre Institute (YEE) are in close cooperation with the Hungarian authorities, particularly to ensure that the common heritage and cultural artifacts in Hungary remain well-preserved.

President Erdoğan is expected today to attend the inauguration ceremony of the Tomb of Gül Baba - an Ottoman-era dervish that took part in an invasion of the Kingdom of Hungary in the 16th century - in Budapest, which was restored by the two countries. The tomb is one of many artifacts in Hungary dating back to the Ottoman era, mostly found in the provinces of Budapest, Pecs, Szigetvar and Eger. TIKA has been carrying out many restoration projects for these monuments.