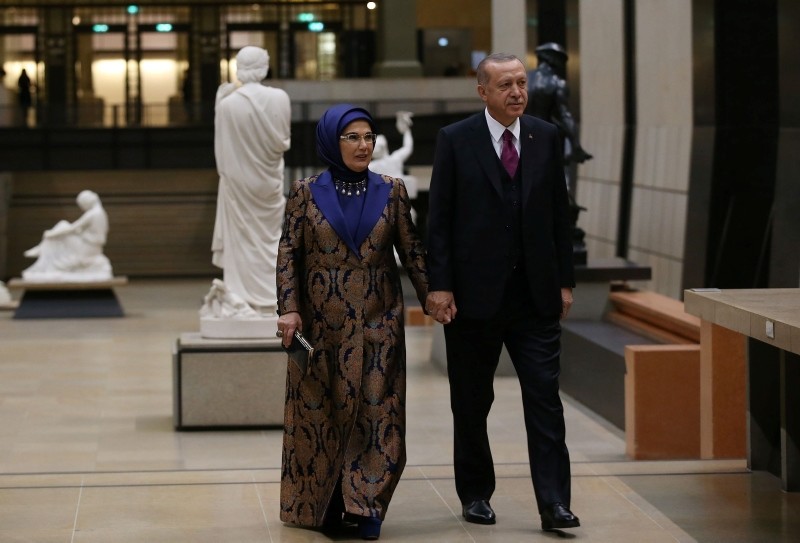 This handout photograph shows President Recep Tayyip Erdou011fan and his wife Emine Erdou011fan as they arrive for a dinner hosted by French President Emmanuel Macron for heads of states in Paris on Nov. 10, 2018. (Turkish Presidential Press Service via AFP)
by Daily Sabah Nov 11, 2018 12:00 am

President Recep Tayyip Erdoğan said in an article penned for Le Figaro that Turkey has always respected the territorial integrity of its neighboring countries and has taken steps to support their peace and stability. Erdoğan added that the continuous fight against terrorism by Turkey is a significant measure to ensure the security of Europe.

"Turkey's objections to the territory sharing of the Sykes-Picot Agreement and its fight against terrorist organizations such as Daesh, PKK and the Gülenist Terror Group [FETÖ], are signs of respect to territorial integrity of our neighboring countries and a necessity of the European nations' security," Erdoğan wrote in the article in the French newspaper Le Figaro, published on Saturday, on the occasion of the 100th anniversary of the end of World War I.

"The biggest lesson that must be drawn from the World War I is the difficulty of establishing a permanent peace," Erdoğan said in the article, and added that Turkey "will continue its efforts toward full membership to the European Union," which he described as the "most important peace project of Europe."

"At the same time, we will continue to contribute to peace and stability in the Middle East by supporting the democratic and libertarian governments that represent the people," the president also said.

Pointing out that the suffering and pain caused by World War I should not be forgotten and lessons should be learned from it, Erdoğan stated that the artificial borders drawn by great powers have generated numerous problems that exist to this day. Touching upon the Syrian civil war, public unrest in Iraq, mounting terrorist threats and the Palestinian issue, Erdoğan added that conflicts are still ongoing despite the end of the Great War.

"A bloody war that ended 100 years ago has shown clearly the results of exploitation, expansionism and hostility to humanity. At the same time, the mistakes made during the attempts to establish an order have unfortunately led to the creating conditions for the World War II and resulted in living the unprecedented pains," the president wrote.

Erdoğan said that those who support political entities disconnected from their people urged coup d'états in countries to hinder democratic people movements such as the Arab Spring, underscoring that these actors have been exerting efforts still to undermine global peace and stability.