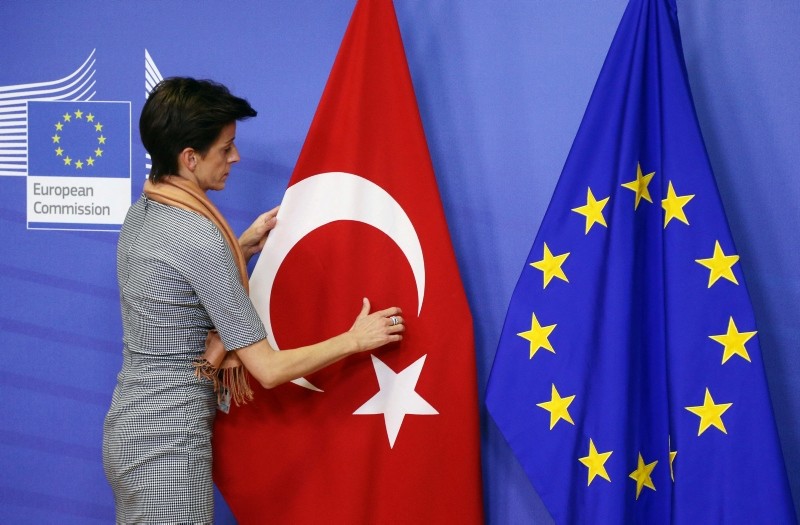 The meeting held Tuesday by four ministers served to remind the EU that it still has a promise to keep in terms of visa liberalization, for the implementation of which Turkey has fulfilled a set of reforms

Ankara stressed Tuesday that Turkey expects the European Union to keep the promises that it has made within the framework of the migration deal, particularly in regards to enabling Turkish citizens to have visa-free access to the EU, as Ankara has already fulfilled its own responsibilities, following the fifth Reform Action Group (RAG) meeting.

The fifth RAG meeting was hosted by Justice Minister Abdulhamit Gül in Ankara with the participation of Foreign Minister Mevlüt Çavuşoğlu, Treasury and Finance Minister Berat Albayrak and Interior Minister Süleyman Soylu. "Our citizens deserve visa-free travel to Europe. We continue our works to get these unjust requirements lifted," Çavuşoğlu said at a joint press conference following the meeting.

"We have said that the seven criteria have fallen to six. It went down when the new passports were recognized by the EU. The EU officially reported this to us. Our joint working groups on issues such as personal protection for Turkey, the Parliament's code of ethics, were met twice. We will continue to work with this determination and obtain visa liberties," Çavuşoğlu continued.

Turkey and the EU signed an agreement on March 18, 2016, to stem the influx of refugees to Europe. Turkey has been the main route for refugees trying to cross into Europe since the beginning of the Syrian civil war.

With the agreement, irregular arrivals decreased over 90 percent, saving the lives of many of those who would have attempted a treacherous journey by sea. As part of the deal, the EU promised to accelerate Turkey's EU talks and visa liberalization. The EU gave Turkey a list of 72 criteria to fulfill for visa-free travel for Turkish nationals after the two sides signed the agreement.

In relation to the process regarding visa liberalization, European Commissioner for Migration and Home Affairs Dimitris Avramopoulos said last month that Turkey had met nearly all of the requirements set by the EU for visa liberalization, except for seven. He underscored that Turkish officials were very determined to complete them all in the shortest time possible.

The regulation that Turkey needs to fulfill for visa liberalization includes an operational cooperation agreement between Turkey and the Europol. Accordingly, Turkey and the EU Commission launched talks in Brussels on Nov. 30 for the agreement with Europol.

It was also highlighted in the press conference that it would be to the benefit of both Turkey and the EU to initiate talks to update the Customs Union. In a joint statement, it was underlined that "within the framework of the March 18 Turkey-EU agreement, we expect the EU to accelerate accession talks to the EU, the implementation of the voluntary humanitarian admission, accelerating the financial aid to the Syrians who are under temporary protection and immediately launching the talks for updating the Customs Union."

In relation to the funds that need to be provided for Syrian refugees in Turkey, Çavusoğlu stressed there are significant delays and disruptions in the EU funding for refugees in Turkey. He also criticized the EU's decision to cut Turkey's pre-accession assistance.

"If they [the EU] think that they are punishing Turkey, they are wrong," Çavuşoğlu underlined.

Speaking at the press conference, Justice Minister Abdulhamit Gül underscored that the issues particularly related to (Chapter 23) the judiciary and fundamental rights and (Chapter 24) justice, freedom and security have been on the agenda.

Interior Minister Süleyman Soylu also said, "I believe that just as Turkey has fulfilled its responsibility for the March 18 agreement, Europe must also fulfill its responsibility. We are a preventative nation in terror and drugs for Europe. For Europe, Turkey is an indispensable country in this regard. Europe is not strong against Turkey on this issue. Europe has a promise on this matter and it has to fulfill it."

In relation to the calls for changes to be made in Turkey's terror laws, Soylu underlined that the fight against terrorism has been significant for Turkey. He added that along its borders, Turkey faces terror threats while the EU does not face such threats on its borders.

Meanwhile, the sixth meeting of the RAG will be held in 2019 under the chairmanship of the Treasury and Finance Ministry.