EU ambassadors to Ankara present their daily lives in ‘My Neighbor, the Ambassador’ project 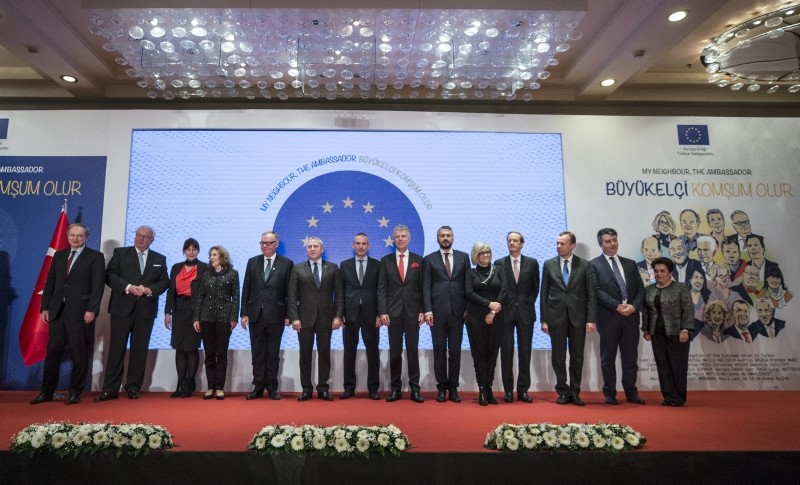 A project entitled "My Neighbor, the Ambassador," which looks at the engagement of 20 ambassadors of EU member countries to Ankara with Turkish people and daily life was presented in a premiere in the Turkish capital on Wednesday with the participation of the ambassadors, reporters and officials.

In the series of minute-long videos, the ambassadors offered closer insight into their daily lives, habits, hobbies and their opinions on Turkish culture and social life. Within the framework of project, the ambassadors of Belgium, Denmark, Estonia, France, Germany, Hungary, Ireland, Italy, Lithuania, Luxembourg, Malta, the Netherlands, Poland, Portugal, Romania, Slovakia, Slovenia, Sweden, the United Kingdom and the EU ambassador to Ankara appeared on camera.

Delivering an opening speech at the event, the EU Ambassador to Turkey Christian Berger said that they want to be a "good neighbor" in the country, adding that they have explored many different aspects of life in Turkey during their tenure.

The videos included a number of short Turkish expressions voiced by ambassadors, which they associated with Turkish nature, music, cuisine, photographs and sports.

At the end of the event, the participants voted for the video they liked most. The German Ambassador to Turkey, Martin Erdmann, who appears riding a motorbike in a suit, was voted the best neighbor by the participants. "My bike brings me into the Turkish world, streets, countryside and people. Because bikers, irrespective to their profession, are all equal. My favorite place is Cappadocia. Cappadocia is a perfect place, either in the air, on a balloon, or on a motorbike on the streets," he said in the video.