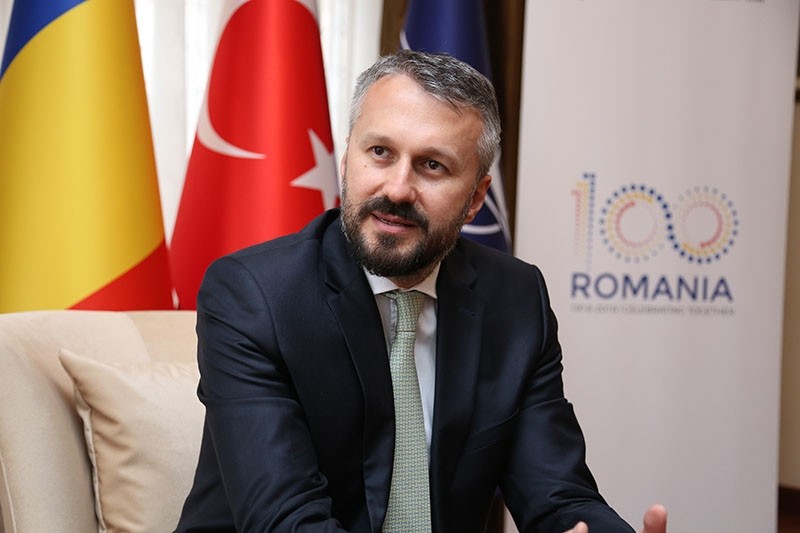 Turkey's relations with the EU will be a priority on the agenda of the Romanian presidency of the European Council, said the Romanian Ambassador to Ankara, Gabriel Sopanda. He added that Romania would exert all efforts to boost ties between Ankara and the 28-country bloc. "We will make every effort to promote a pragmatic, constructive and dynamic relationship between the EU and Turkey," Sopanda told Daily Sabah in an interview. Romania's mandate in the rotating presidency of the council started on Jan. 1 and will last until June 30. This is the first presidency for the country, marked by political developments and dossiers with a decisive impact on the future of the union.

"Taken into consideration the fact that Turkey is a candidate country and a key partner of the EU, maintaining dialogue and cooperation is important in addressing issues of common interest, such as effective migration management, fighting terrorism and energy cooperation," the Romanian envoy said.

In relation to the efforts to enhance dialogue, Sopanda said that as a neighbor and friend of Turkey, Romania is willing to explore opportunities for positive approaches and contacts in close cooperation with member states and European institutions in order to foster concrete progress.

He added that the priorities during Romania's presidency would reflect on the need for cohesion and have four main pillars of action - Europe of convergence: Growth, cohesion, competitiveness and connectivity; a safer Europe; Europe as a stronger global actor; and a Europe of common values.

Last month, Romanian Foreign Minister Teodor Meleşcanu said that Romania strongly supports the continuation of Turkey's accession talks, adding that they have been working on a joint summit plan for early March between Turkey and the EU in Bucharest with the planned participation of President Recep Tayyip Erdoğan and other top officials. However, no exact date has been set yet.

As there have been some positive signals for a joint resolve to boost dialogue, Foreign Minister Mevlüt Çavuşoğlu announced earlier this month that Turkey-EU ties would further normalize in the upcoming period under the term presidency of Romania, adding that the Turkey-EU Association Council will meet on March 15.

With an aim of adding new momentum in talks with the EU, Turkey has also been taking steps to implement some reforms as agreed in Reform Action Group (RAG) meetings. Following the implementation of the necessary reforms, Ankara expects to see some progress in issues like visa liberalization.

The role of the rotating presidency of the council requires impartial and professional handling of all the items under the current European agenda during the six-month mandate. The most important topics include: Defining the budget of the EU for 2021-2027, the functioning of the internal market, EU's internal security agenda, the fight against terrorism, managing migration challenges and reinforcing the EU on a global level.

As Romania will lead the EU during some critical events, including the U.K.'s exit from the bloc, the European parliamentary elections and negotiations on the next EU multi-annual budget framework, Sopanda said: "Given the amplitude of the challenges that you mention, Romania is exercising its mandate as council president with pragmatism and responsibility. Bucharest will act as an honest broker aiming to reach agreements on a number of key policy and legislative issues before the European Parliament elections in May."

In relation to Turkey-Romania bilateral ties, Sopanda said Turkey is a key strategic partner of Romania, which is reflected in their deep bilateral cooperation as well as by common interest concerning the stabilization of the wider Black Sea region.

The ambassador stressed that Turkey is also a privileged commercial partner for Romania and this is due to geographical proximity, a tradition of neighborly relations and a shared cultural understanding that facilitate cooperation.

Touching on the economic ties between the countries, Sopanda said steps can be taken to further enhance the cooperation.

Turkey is Romania's largest trading partner outside the EU. The volume of bilateral trade crossed 5 billion euros ($5.63 billion) at the end of 2017, with a 10 percent increase from the previous year, and the growth trend continued through 2018.

Major Turkish investment projects in Romania, like banking, manufacturing, food processing and construction, are doubled by the strong presence of Turkish small and medium enterprises.

"During the visit of the Romanian prime minister in October 2018, an ambitious goal for this cooperation was spelled out by the Turkish side to reach $10 billion in the upcoming period," the Romanian envoy said. "This goal can be reached with the support of Romanian trading companies that can take advantage of the scale of the Turkish market of 80 million people," he added.