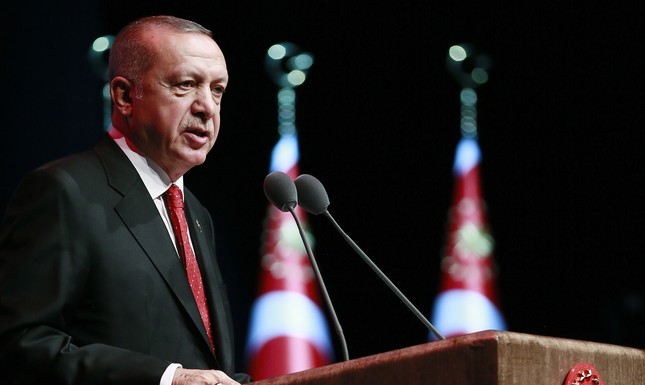 Turkey introduced new judicial reform on Thursday with the aim to strengthen the independent, objective, accountable and transparent features of the judiciary. Announcing the reform strategy, President Recep Tayyip Erdoğan said the reforms will ensure the citizens' trust in the system while enabling an investment atmosphere that is more predictable, adding that the reforms will also strengthen freedom of speech.

The judicial reform strategy consists of two basic perspectives, nine targets, 63 objectives and 256 activities. The nine targets are the protection and improvement of the rights and freedoms, improvements of judicial independence, objectivity and transparency, improving both the quality and quantity of human resources, increasing performance and productivity, enabling the right of defense to be used effectively, making justice more approachable, increasing the effectiveness of the penalty justice system, simplifying civil justice and administrative procedure and lastly, popularizing alternative mediating methods. Prepared by the Justice Ministry for the period of 2019-2023, the reform strategy envisions a "trust ensuring, approachable justice system."

Mentioning these targets, Erdoğan underlined that in the upcoming periods, it is aimed to protect the right to a fair trial more effectively.

"We have determined some targets and activities that aim to ease the works of the citizens in the courthouse. The simplification of the regulations, the strengthening of the right to fair trial and defense are among the steps that we will take," Erdoğan said, adding that it will be provided for the decisions regarding the freedom of thought to be inspected by the Supreme Court as well.

Erdoğan continued his speech by expressing that they are planning to have separate regulations for the duration of imprisonment both in investigation and prosecution processes. A new "Human Rights Action Plan" is also on the way to put detailed regulations on the rights and freedoms.

He added that the discipline procedures for the judges and prosecutors are also being restructured, and new centers will be established to measure the performance in the judiciary. The investigations and cases that are long-lasting will be followed through a system that will be established within these centers, Erdoğan said. Moreover, for senior judges and prosecutors, it will not be possible to change their location of duty without their will. For certain occupations, the conditions for being a senior will be re-determined.

The legal rights of lawyers to demand information and documentation will also be broadened, the president expressed while adding that special courts will be formed to enable the cases regarding environment, public works and energy to be conducted more effectively. He further said the lawyers will receive green passports if they fulfill certain criteria to ease their international affairs.

Offices that will enable citizens to receive consultancy regarding the legal issues will be established, while the system will be more approachable for the disabled and elderly as well.

The law faculties' length of education and student quota as well as the criteria to accept the students will be regulated. The curriculum will also be renewed. Besides, an entrance exam will be introduced for the occupations related to law, while there will also be a new occupation named the deputies of judges and prosecutors.

"Despite everything, we believe that the completion of the EU negotiation period that has been ongoing since 2005 is as important as Europe as it is for us. With this reform document, although they do not keep their promises, we expressed our commitment to the EU membership process," Erdoğan highlighted.

"One of the greatest gains of the EU accession process was the ability to systematically implement reform efforts. We are implementing the reforms not because the EU wants us to, but because our nation needs it," he stressed.

The strategy is determined by consulting the bar associations, law faculties, nongovernmental organizations, judges, prosecutors, lawyers, writers, journalists and academics. In addition to the views of the experts, there have been also surveys conducted with the citizens regarding their expectations. The document is being prepared in accordance with the EU negotiations' 23rd chapter that is titled "Judiciary and Fundamental Rights." In the preparation period of the reforms, there have also been meetings in European Council and EU commission.

In its report published Wednesday, the EU accused Turkey of distancing itself from the bloc and its values, adding that it sees no reason to unblock the country's EU membership talks. The report underlined "further serious backsliding" on human rights, judicial independence and stable economic policy.

The EU decided last year that no new chapters in Turkey's accession talks should be opened or closed and the latest report noted that "the underlying facts leading to this assessment still hold."

Signing a partnership agreement with the European Economic Community (EEC) in 1963, Turkey applied for EU membership in 1987 and accession talks began in 2005. But negotiations stalled in 2007 due to objections of the Greek Cypriot administration on the divided island of Cyprus as well as opposition from Germany and France.

Erdoğan said earlier this month that Turkey would continue to work toward its strategic goal of becoming a full member of the European Union.

In October, Erdoğan said he would consider putting Turkey's bid to join the European Union to a referendum, signaling exasperation with a process he says has been waylaid by prejudice against Muslims.

This unfair stance against Turkey becomes more apparent as more and more countries become members of the union, while Turkey has been struggling with the issue for decades.

Share on Facebook Share on Twitter
Previous in EU Affairs It is a great honor to be able to represent the people, said Engin... Next in EU Affairs Defending arguments of the Greek Cypriot Administration of Southern...
DAILY SABAH RECOMMENDS