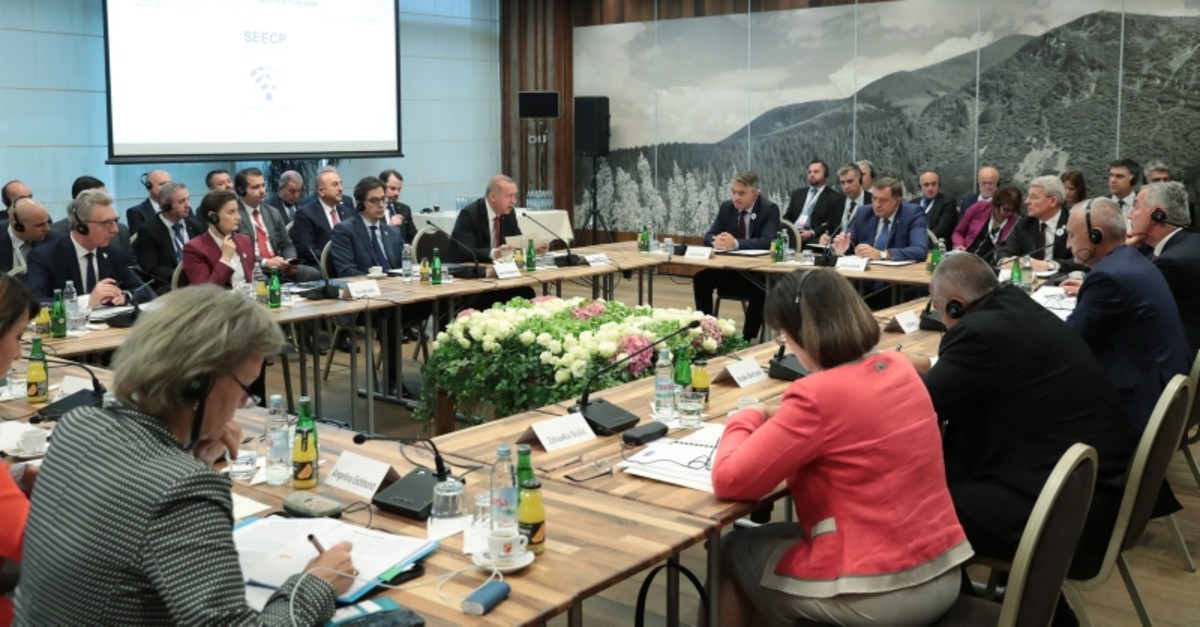 Turkey has played a key role in assisting refugees and stemming the flow of irregular migrants to Europe, but its European neighbors have failed to come through on their commitments of support, President Recep Tayyip Erdoğan said Tuesday at a summit in Bosnia-Herzegovina.

Erdoğan told participants at the Southeast European Countries Cooperation Process (SEECP) summit in Sarajevo that Turkey has made an "invaluable contribution" to the security of Europe. He noted that Turkey's efforts have significantly reduced the transition of migrants to Europe and prevented tragedies in the Aegean, a route irregular migrants have used to reach Greece.

"We have made invaluable contributions to the security of the entire European continent, particularly to the Balkan countries. However, we did not see the support and humanitarian attitude that we expect from our European friends during this difficult time," Erdoğan said.

"Contribution commitments to our country were not fulfilled. Only 2.5 billion euros of the 6 billion euros were released," he said, referring to the 2016 migration pact with the EU promising 6 billion euros ($6.72 billion) in financial aid in exchange for Turkey taking back irregular migrants from Greece.

Since the Syrian civil war erupted in 2011, hundreds of thousands of people have been killed and more than 10 million displaced, according to U.N. figures.

Despite some factions in Turkey becoming restive due to a record number of refugees in various cities and a large amount of money spent on them amid deteriorating economic conditions in the country, the government insists on keeping its open-door policy along with maximum support for refugees.

EU Ambassador to Turkey Christian Berger said last month that Ankara has been carrying out some great work by hosting millions of refugees from Syria and other parts of the world, adding that its achievement was not recognized enough.

Ankara and Brussels signed an agreement in 2016 to find a solution to the influx of refugees heading to the union. According to the deal, Turkey was promised a total of 6 billion euros in financial aid, which was initially designed to be given to the country in two stages and be used by the Turkish government to finance projects for Syrian refugees. Visa freedom for Turkish citizens was also to be provided under the agreement. Lastly, the customs union was also to be updated in accordance with the deal.

Turkey cleared an area of approximately 4,000 square kilometers of two terrorist groups, Daesh and the PKK-affiliated People's Protection Units (YPG), in two operations in 2016 and 2017. It helped the Free Syrian Army (FSA) weed out terrorists from al-Bab, Jarablus and other towns during Operation Euphrates Shield, and from Afrin in Operation Olive Branch.

On Tuesday, Erdoğan will commemorate the 24th anniversary of the Srebrenica genocide, in which over 8,000 Bosnian Muslims were massacred by Bosnian-Serb forces under President Slobodan Milosevic and General Ratko Mladic.