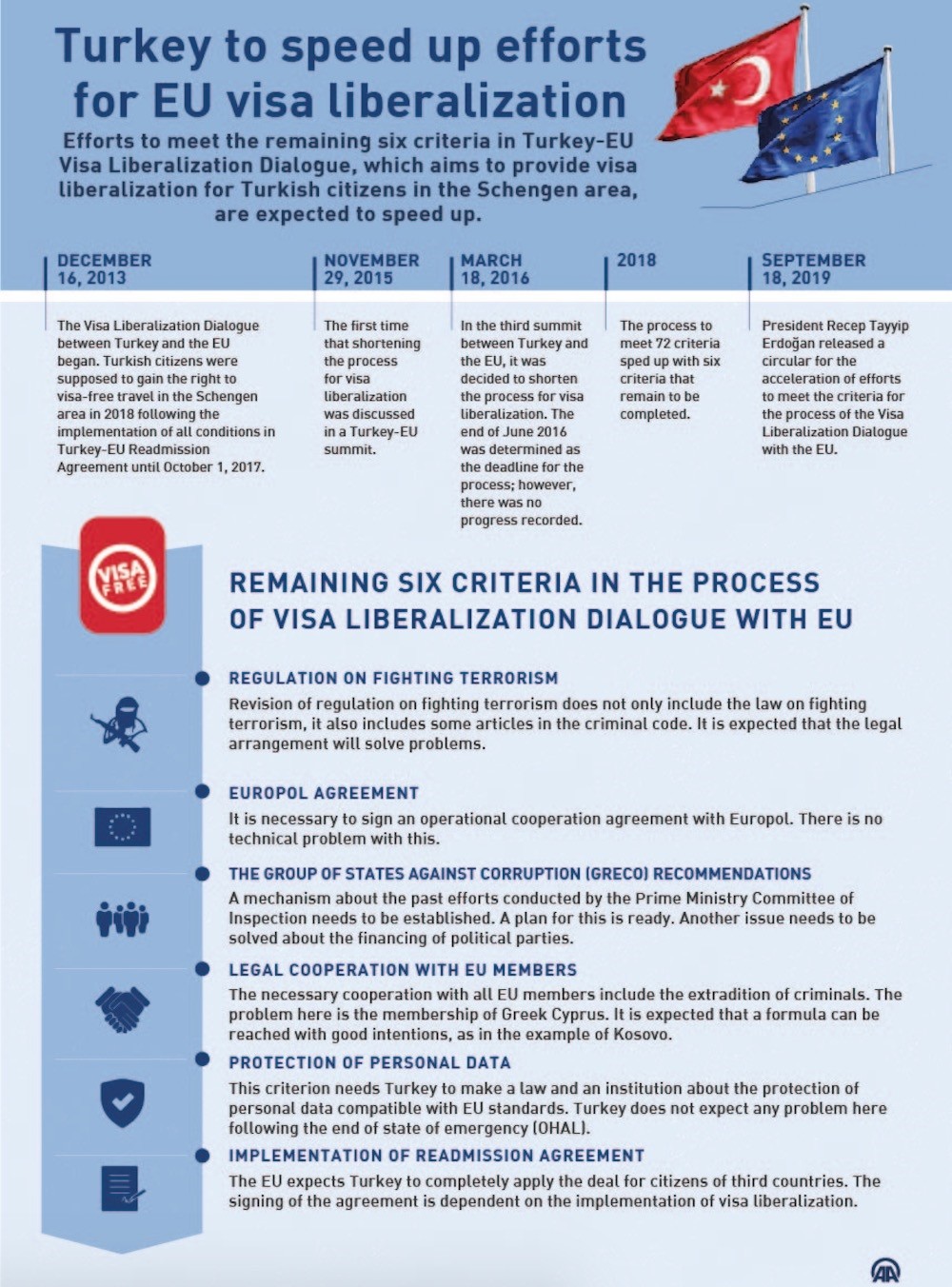 The long-standing ties between Turkey and the EU are on the brink of yet another milestone. Ankara has already fulfilled 66 of the 72 criteria the union demands for visa liberalization

Ankara is getting ready to fulfill the remaining six criteria mandatory for the liberalization of visa restrictions for Turkish citizens within the EU, giving momentum to the related works in the upcoming period. Since Turkey's first application to the European Union back in 1963, the visa liberalization process for Turkish citizens has been a major point and gained even more momentum last year when Ankara set out to fulfill the 72 criteria being levied on them. Now, almost a year later, an overwhelming majority of these criteria have been achieved. The remaining six criteria are expected to be fulfilled in the upcoming few months as the country published a circular Wednesday in the Official Gazette on accelerating efforts. 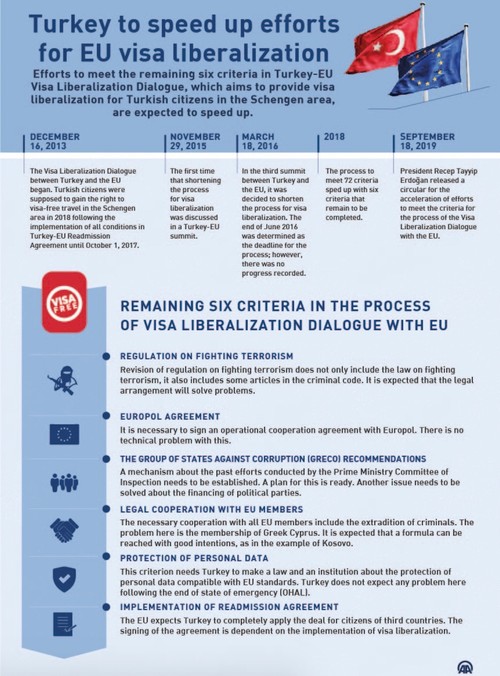 "In order to ensure the completion of visa liberalization for our citizens, it is necessary to accelerate the efforts to meet the criteria registered in the visa liberalization road map and to ensure the continuity of the efforts which are confirmed to have been met by the European Commission," the circular said. "[Visa liberalization] should have taken place ages ago. However, there is a psychological obsession in the EU that goes beyond the criteria," said Emre Gönen, an international relations expert at Bilgi University, adding that in normal conditions, visa liberalization is given to countries at the time when their negotiation process for full membership first starts, which was 2005 for Turkey. "It's been 14 years, and still they are resisting," he said, pointing to the unusual nature of the issue.

"EU countries' politicians do not want to tell to their voter bases in their individual countries that they let Turkey have this right," Gönen further indicated.

President Recep Tayyip Erdoğan recalled that the dialogue started simultaneously with a readmission agreement that was signed on Dec. 16, 2013. The agreement that was reached at that time was suggesting that following the fulfillment of all the responsibilities of Turkey in the 2016 migration deal with the EU by Oct. 1, 2017, Turkish citizens would have been able to travel freely to the Schengen area by 2018.

"Visa liberalization is a right that is being given to the ally countries, regardless of their membership to the union," Gönen said, reminding the media that Georgia and Ukraine have visa liberalization despite being under foreign invasion.

Visa liberalization was designed so Turkish citizens with biometric passports would be able to enter the Schengen area within 180 days for three months without any visa. With this initiative, Turkey-EU ties, which were struggling due to the union's discriminative attitude by excusing some political obstacle claims, has entered a new era through the migration crisis.

On Nov. 29, 2015, the first Turkey-EU summit took place, and a memorandum was released in the aftermath expressing that the membership negotiations will be revived, cooperation against terrorism will be strengthened, summits will be conducted regularly, close cooperation will be resumed through senior dialogue mechanisms at the political, economic and energy levels, the EU will provide monetary assistance to the Syrian refugees in Turkey and the customs union deal will be updated. Lastly, the union promised to fast forward the process of visa liberalization for Turkish citizens.

At a summit on March 18, 2016, the third meeting between the two, the visa issue was raised once again, and it was decided to be applied at an even earlier date, on June 2016. However, in order for the process to start on the envisaged date, the EU Commission was supposed to present the third and last visa progress report and an offer of visa liberalization to the EU Council and European Parliament at the latest that May.

This meant that Turkey was supposed to fulfill its own part of the deal until the end of April. Despite the fact that Turkey completed its part successfully, no progress has been achieved regarding visa liberalization.

"There were various topics that Turkey and the EU agreed on; however, most of them have been pending," he said.

Back in September, Erdoğan said regarding the judicial reform strategy document that, "Although the EU bodies are openly discriminating against our country, we, with this reform package, are showing that we are committed to our responsibilities for full membership."

The president also demanded previously in May from the ministries and state institutions the fulfillment of the reforms necessary as soon as possible. Among the institutions that were founded under the scope of the visa liberalization dialogue, six working groups have been formed, which are also continuing their work on the issue.

Authorities underline that the remaining six criteria can "technically" be met within a few months and since the country has left the election period behind, the months after October will be the ones that will bear concrete outcomes.

"As an Italian, I can come to Turkey with just my identity card. However, in order for a Turk to come to Italy, he or she needs to apply for a visa and go through that process. It is not fair," Valeria Gianotta, an assistant professor at Türk Hava Kurumu University said, underlining that there has been a double standard against Turkey during the negotiation process due to the anti-Turkey stance of some EU members.

The current situation regarding the remaining six criteria is as follows:

The first one is the fight against terrorism regulation. The review of the fight against terrorism regulation not only includes the counterterrorism law but also some articles of the criminal code. The issues that were creating problems with the EU were the conditions regarding those who cover their faces in demonstrations and freedom of speech. The question of "whether covering faces should be included under the scope of terrorism or is it a regular crime" was on the table. Now, with legal work being done on this, it is estimated that the issue will no longer create a problem between the two.

Although there might be difficulties with the definition of terrorism, the recent remarks of the EU saying, "We know Turkey is not Luxembourg," suggests that the union is ready to have a more flexible stance on the country.

Ankara is trying to gain empathy from the EU side, saying that no other country in the world has to fight three terrorist organizations, the PKK, Daesh and the Gülenist Terror Group (FETÖ), at once.

According to Gianotta, the terrorism law criteria is the main reason the process is being held back. Pointing at the delay despite the fact that the visa liberalization was one of the main conditions of the migration deal between the two, Gianotta said there is a positive note here, which is the fact that Ankara and Brussels have started to talk again.

Agreeing with Gianotta, Gönen also underlined that the criteria regarding terrorism has caused problems. However, according to Gönen, it is not very likely for this issue to be solved due to the conditions that Turkey faces and unlike expectations; the EU is actually quite strict on this point.

MOST OF REMAINING CRITERIA DO NOT HAVE ANY TECHNICAL DIFFICULTIES

The second criterion is the Europol deal, which necessitates a cooperation agreement with the police forces of the EU and does not have any technical problems ahead.

Another criterion is about the Group of States Against Corruption (GRECO) recommendations. The application of these recommendations and the increase of the transparency and the strengthening of the fight against the corruption action plan are expected to be updated and applied in Turkey. In order for this to be achieved, a mechanism is expected to be founded regarding the works that were previously conducted by the Prime Ministry's inspection board. It has been reported that the works regarding this initiative have already been completed.

A step regarding the ethical rules of parliamentary members is also included under this criterion. Reiterating that the issue was already included on Parliament's agenda before the elections, it was reported that in the next period, Parliament will include this in its agenda once again.

A change in the regulation of the funding of the political parties is another point that is included under this criterion.

The next criterion is about legal cooperation with the EU member states as a whole. This cooperation is generally based on the extradition of the criminals. At this point, the problem is the EU membership of the Greek Cypriot administration of southern Cyprus. It is not possible for Turkey to cooperate with Greek Cypriots, a state that Ankara does not even recognize. However, it is reported that with good intentions, a solution can be achieved. The example of Kosovo can be used for Turkey as well in this respect. Since there are countries that do not recognize Kosovo, the EU came up with a solution of appointing its own legal cooperation representative of Kosovo.

When it comes to the criteria of the protection of personal data, it is mandatory for Turkey to make its own law and institution on the issue compatible with EU standards. On Ankara's part, there does not seem to be many problems. After the July 15, 2016 coup attempt, during the state of emergency period, steps on the issue were not taken. However, since there is no longer a state of emergency, it is expected the issue will be solved.

The 2016 EU-Turkey deal helped ease the crisis on Greek islands near Turkey, whose facilities were overwhelmed by a refugee influx in 2015. The numbers of refugees and migrants coming from Turkey have been significantly reduced as a result. It was agreed that irregular migrants arriving on the Greek islands from Turkey who do not apply for asylum or whose application has not been accepted may be returned to Turkey. But that rhythm changed this August, the busiest month in more than three years, feeding fears of a new wave of mass migration across the Aegean Sea as attacks by the Bashar Assad regime in northwestern Syria's Idlib have intensified. The increasing numbers reportedly have pushed the Turkish government to adopt a stricter stance.