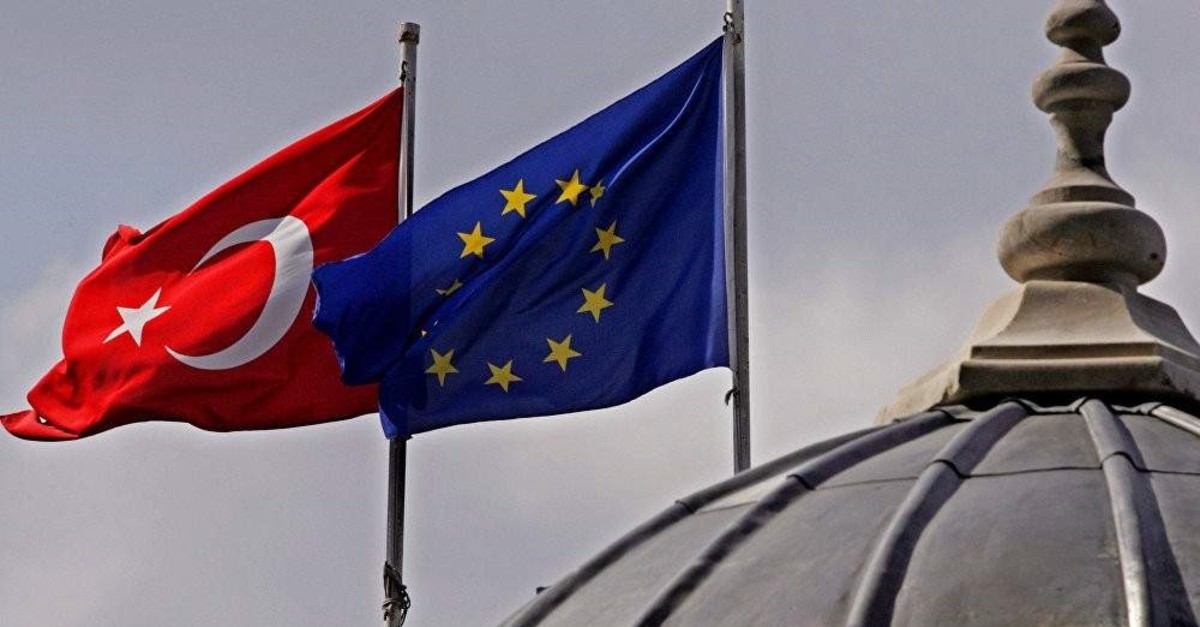 | File Photo
by Daily Sabah Dec 08, 2019 1:47 pm
Turkey and the European Union should shore up trust in one another as the latter cannot even be conceived of without the former and vice-versa, the EU-Turkey Delegation chair said on Saturday, emphasizing the need to pump a new lease of life back into relations between the two powers.
EU-Turkey Joint Parliamentary Committee Chair Sergey Lagodinsky, a German Green Party politician elected in the European Parliament elections in May 2019, underlined the importance of focusing on common areas of cooperation, rather than disagreements, in reviving EU-Turkish relations.
Lagodinsky told NTV that he had chosen the job because he feels very close to Turkey, Turkish culture and society as he lives in Germany, which hosts the largest Turkish community outside Turkey.
“I personally think we need to start off our relations with dialogue based on mutual trust,” Lagodinsky said, speaking of tensions that had developed between Turkey and the bloc.
Turkish officials have criticized the European Union for a number of factors, including the bloc’s indifference to Turkey’s anti-terrorism operations, a lack of solidarity following the deadly FETÖ-led coup attempt in 2016, the lack of outside assistance on the migration issue and the bloc’s failure to adhere to agreements.
But Lagodinsky thinks the two sides can overcome these problems by focusing on the positive and attempting to engage in dialogue on critical issues, rather than completely cutting ties.
“We have a common European future and this is quite important for me. Even if we criticize each other, and go as far as using harsh language when arguing, these all need to be based on the basis of mutual trust,” he said, adding that both actors needed each other to face the challenges of the future.
In response to a question about the problem of the European Parliament not seeking dialogue or meetings to resolve issues with Turkey, the newly elected chair said he suggests holding one-on-one meetings.
“Let us all sit around a table and discuss these problems. I have hereby invited members of the Turkish parliament,” he said, noting that they aimed to ease tensions and facilitate working meetings in which both sides could discuss the European Parliament's concerns regarding Turkey’s anti-terror operations in Syria, and Turkey’s concerns regarding the EU’s stance toward terrorism and terrorist organizations.
Acknowledging growing racism and xenophobia in Europe, Lagodinsky said it was important for the bloc to recognize its own problems.
“I think there is growing enmity against Muslims in Europe and racism is also increasing, and I know many people in Europe, including the Turkish community, and the Turkish people in Turkey share this concern,” Lagodinsky said, adding that a discussion on how to resolve these issues was necessary.
There are other joint projects that the EU and Turkey will work on, including visa liberalization, he said, noting that these projects had the potential to renew Turkey's trust. The EU decided last year that no new chapters in Turkey's accession talks would be opened or closed.
Turkey has been preparing a new initiative to accelerate the accession process to the European Union. Accordingly, Turkey will complete regulations for six more chapters, including the fight against terrorism. Relations between Turkey and the EU entered a complicated period due to the EU's negative stance against Turkey following the July 2016 failed coup. Emergency measures taken by Turkey following the coup attempt drew negative criticism from the EU.
Signing a partnership agreement with the European Economic Community (EEC) in 1963, Turkey applied for the EU membership in 1987, became a member country in 1999 and accession talks began in 2005. But negotiations stalled in 2007 due to objections of the Greek Cypriot administration on the divided island of Cyprus as well as opposition from Germany and France.
Ankara and Brussels signed an agreement in 2016 to find a solution to the influx of refugees heading to the union. According to the deal, Turkey was promised a total of 6 billion euros ($6.6 billion) in financial aid, which was initially designed to be given to the country in two stages and be used by the Turkish government to finance projects for Syrian refugees. Visa freedom for Turkish citizens was also promised to be provided under the agreement.
The customs union was also to be updated in accordance with the deal. In exchange for these promises of the EU, Turkey took the responsibility of discouraging irregular migration through the Aegean Sea by taking stricter measures against human traffickers and improving the conditions of more than 3 million Syrians living in Turkey.
Despite significant developments in the control of migration traffic, the EU could not deliver on its commitments stated in the deal.
Last Update: Dec 20, 2019 2:13 am
RELATED TOPICS