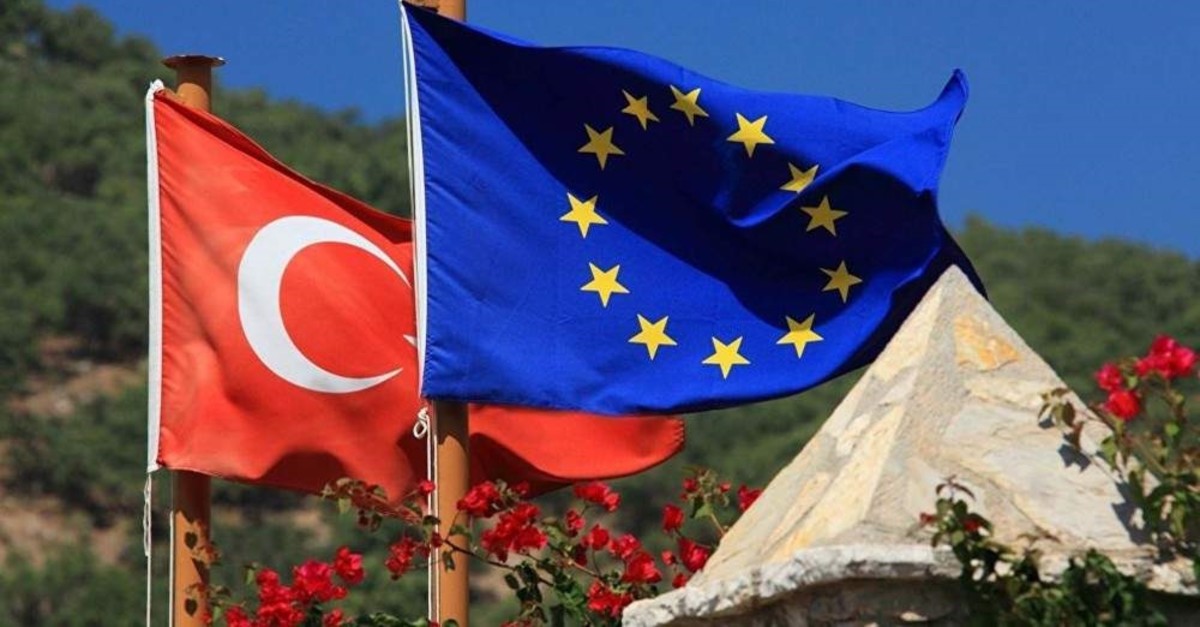 Turkey has the longest history with the European Union among other states with candidate status, including the longest process of negotiations, since its journey started back in 1964 with the signing of an association agreement.
by Daily Sabah with AA Feb 06, 2020 6:33 pm

EU revised the process of accession to the union with the promise of a more credible, effective journey for candidate states. However, there is still no hope for countries like Turkey who have been on the waitlist for over a year

The European Commission adopted a new procedure for accession negotiations to the union, with an aim to have a "more credible" process as the current candidate countries like Turkey wait in anticipation.

Announcing the revision Wednesday, the commission claims that the alterations base the accession negotiations on four main pillars: credibility, stronger political steer, a more dynamic process and predictability for both sides.

"It aims to make the enlargement process more credible, predictable, dynamic and subject to stronger political steering. This will reinvigorate the accession process and make it more effective, enhancing credibility and trust on both sides," the commission stated regarding the move.

The new procedure incorporates several ideas suggested by the French government, which opposed further enlargement of the union by preventing the process from continuing for North Macedonia and Albania. For example, the negotiation process can be reversed or completely suspended in case of no progress or backslide in certain policy areas. In reality, it means that already closed negotiation chapters can be reopened if the candidate country failed to deliver the promised reforms. The European Commission will also join forces with national experts from member states to assess the candidate country's development.

According to the Commissioner for Enlargement and Neighborhood, Oliver Varhelyi, who spoke at a news conference Wednesday on the issue, the revision particularly targets the Western Balkan countries, which concern France the most.

The EU perceives enlargement as "geostrategic investment" to establish peace and prosperity in the region, the commissioner explained. He also expressed hopes that EU leaders would give a green light for starting accession negotiations with North Macedonia and Albania before May's EU-Western Balkans Summit in Zagreb. He warned to be cautious with the deadlines but reassured the public the European Commission was working on the case.

EU heads of state and government could not approve the opening of the enlargement process with the two countries due to France's opposition in October.

In Varhelyi's opinion, the EU also needs to deliver its promises in order to establish "trust and credibility" for its partners. This is why the EU will be more precise and predictable in the new process by making clear when the given reforms need to be delivered.

The new methodology only concerns those countries that have not yet started the negotiations process. That is to say, it will be "formalized into" the process for North Macedonia and Albania. However, for instance, when it comes to Serbia and Montenegro, embracing the revision will depend on their preferences, although the commission advises it for the most part. Even though there is no mention of Turkey, many pundits deduce the revision would not apply to the country.

Turkey has waited for membership since 1987

Although any European country with a shared respect for EU's democratic values is eligible to apply, the criteria that were determined in 1993 in Copenhagen must be met in order to become a full member.

As of 2020, there are three countries that are in the negotiation process: Turkey, Serbia and Montenegro. Although Albania and North Macedonia are regarded as candidate countries, their negotiation process is yet to be started while Kosovo and Bosnia-Herzegovina are considered potential candidates.

Among these countries, Turkey is the one with the longest history with the union, including the longest process of negotiations. The country signed an association agreement with the EU in 1964, which is usually regarded as a first step to eventually become a candidate. Applying for official candidacy in 1987, Turkey had to wait until 1999 to be granted the status of a candidate country. For the start of the negotiations, however, the country had to wait for another six years, until 2005, having a uniquely long process compared to other applicants. Montenegro, for instance, applied for membership in 2008 and was granted candidacy only two years later, in 2010. Many other countries, such as Bulgaria and Croatia, have become member states within the past decade, despite applying for candidacy much later than Turkey.

Apart from this slow process of negotiations, the potential membership of Turkey in the union faced a new challenge in 2016, when a coup attempt by the Gülenist Terror Group (FETÖ) took place, forcing the country to declare an state of emergency. Unhappy with this move, the European Parliament on Nov. 24, 2016, stated that it would temporarily "freeze" the negotiations with Turkey, which has caused the process to remain at a standstill since then.

However, recently, Turkey has been preparing a new initiative to accelerate the accession process to the EU. Accordingly, Turkey will complete regulations for six more chapters, including the fight against terrorism. On Wednesday, Foreign Minister Mevlüt Çavuşoğlu said that it is time to usher in a new era with the EU in Turkey's nearly half-a-century-long accession talks, calling on the bloc to review its decision to suspend high-level meetings between the two sides.

"We see a constructive approach of EU's term president Croatia on this issue," Çavuşoğlu said in a meeting with EU ambassadors, adding that anti-Turkey rhetoric among the bloc is recognized not only by the Turkish government but also by the Turkish people. "Unfortunately, distrust between the two sides is growing deeper," he stressed.

Despite the intention of the country to move on, there are several challenges awaiting Turkey. Probably the biggest one is the dispute over Cyprus, which has been the major issue in the negotiation process.

The Turkish Republic of Northern Cyprus (TRNC), established in 1983 on the northern one-third of the island, is only recognized by Turkey and faces a longstanding embargo in commerce, transportation and culture. Meanwhile, the Greek Cypriot administration enjoys recognition by the international community as the Republic of Cyprus, established in 1960.

Turkey has consistently contested the Greek Cypriot administration's unilateral drilling in the Eastern Mediterranean, stating that the exclusive economic zone unilaterally declared by Nicosia violates part of Turkey's shelf, particularly in Blocks 1, 4, 5, 6 and 7.

Last year, Greek Cyprus and Greece said they could seek EU sanctions against Turkey, though the bloc has not been seen acting on that for now.

Greek Cyprus was admitted to the EU in 2004, violating the EU's own rules of not allowing candidate countries with border disputes and assurances to Turkey and Turkish Cypriots that the Cypriot accession would not take place until a permanent solution had been reached on the island.

Greece and Greek Cyprus have long used the veto card in EU institutions against Turkey.