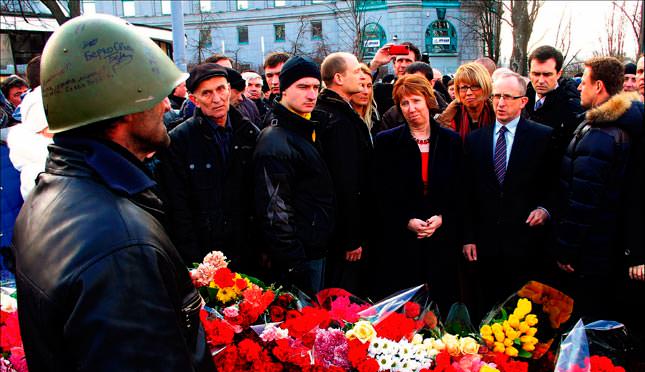 As discussions to form a national unity governement continue, the parliament in Kiev votes to send Viktor Yanukovich to be tried for 'serious crimes' in the International Criminal Court

Ukraine's assembly yesterday passed a resolution linking ousted President Viktor Yanukovich, who was removed from power on Saturday and is now on the run, to police violence against protesters which the legislative branch said led to the deaths of more than 100 people from Ukraine and other states.
The resolution said former interior minister Vitaly Zakharchenko and former prosecutor general Viktor Pshonka, who are being sought by the authorities, should also be sent for trial at the International Criminal Court (ICC), based in The Hague.
Ukraine issued an arrest warrant Monday for the deposed president while Russia questioned the legitimacy of the interim authorities.
On Tuesday, heavyweight boxing world champion Vitali Klitschko announced that he will run for Ukraine's presidency in elections scheduled for May 25. "I will be on the ballot for the post of president of Ukraine," the protest leader told journalists.

Meanwhile, the European Union's foreign policy chief Catherine Ashton called Tuesday for Russia to assist Ukraine as the ex-Soviet state struggles to resolve its worst crisis since independence. "It is very important that Russia, as a very important neighbor of Ukraine, also lends its support to ensure the country can move forward in a way it wishes to," Ashton told journalists during a two-day visit to Kiev.

She also stressed "the importance of the strong links between Ukraine and Russia and the importance of having them maintained."
Ashton sought to ease Moscow's fears following a dramatic week of rapid-fire change in Ukraine that has seen the oppositiondominated parliament oust Kremlin-allied Yanukovych after scores of people were killed when protests exploded into violence in Kiev. The initial demonstrations were sparked when Yanukovych spurned a historic deal in November with the EU in favor of closer ties - and a now-stalled $15 billion bailout - from former master Russia. "We offer support, not interference for the future," Ashton said after meeting with lawmakers and laying flowers at a shrine for dead anti-Yanukovych protesters.

Western countries have warned Moscow to respect Ukraine's territorial integrity after the Kremlin blasted its new leaders as mutineers, amid fears that the country's pro-Russian east could agitate for partition.

Interim leader Oleksandr Turchynov on Tuesday delayed the appointment of a new interim unity government until Thursday as the country teetered on the brink of financial collapse. Kiev warned it needs $35 billion over the next year to avoid ruin and called on Western donors to step up to the plate urgently. She however offered no concrete commitments of economic assistance, saying only that the International Monetary Fund was "very keen" to meet the future new government. "The new government needs to be inclusive and needs expertise and a credible economic plan and to restore law and order everywhere," she said. She also urged "independent investigations" into last week's bloodbath after the arrest warrant was issued.

EU officials said Monday that Brussels was not ready to sign the ground-breaking political and trade pact that was at the root of the crisis. "I think our idea is that we must let a transition process go to its final point and once we have a government we will be ready to discuss again," Europan Commission spokesman Olivier Bailly said.