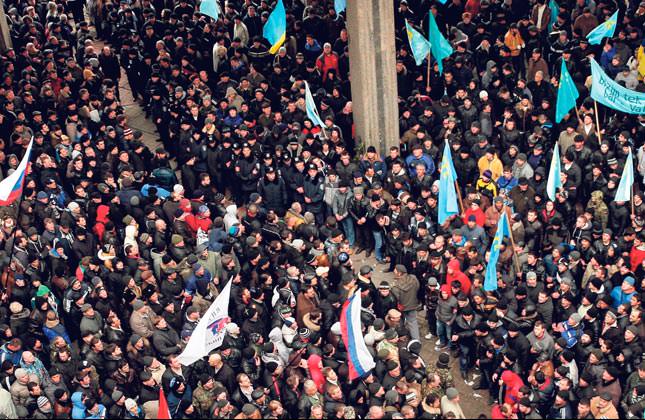 During a press conference with his Bulgarian counterpart Kristian Vigenin in Sofia yesterday, Turkish Foreign Minister Ahmet Davutoğlu said, Crimea is a part of Ukrainian territory

He said Crimea was a gateway to Ukraine for Turkey and that the government believed all problems could be resolved within a united Ukraine. "We, as Turkey, call on all ethnic and religious leaders in Crimea to come together and ensure the region contributes to Ukraine's peace," he dded.

Noting they had continuous communication with the parties regarding the recent developments in Crimea and Ukraine, Davutoglu said the country's unity, welfare, peace and stability was important for Turkey.

Davutoğlu added, "Turkey attaches importance on democracy and a democracy- based political stability in Ukraine's future." "Crimea is important for Turkey as it is Turkey's door to the Ukraine and it is also important for our Tatar compatriots," stated Davutoğlu. Meanwhile, Pro-Russia armed men seized the regional government headquarters and parliament on Ukraine's Crimea peninsula yesterday, once again putting Ukraine and Russia on alert.

Following last week's riot police attack on protesters in Kiev which killed more than 80 people, the new seizure in Crimea once again escalated tensions in Ukraine, which is divided in loyalties between Russia and the West. In Russia, some 150,000 Russian soldiers carried out military exercises, and fighter jets patrolled the border, as a respected Russian newspaper reported that Moscow is sheltering fugitive Ukrainian President Viktor Yanukovych.

Oleksandr Turchynov, who stepped in as acting president of Ukraine after Yanukovych's flight, warned that any move by Russian troops off of their base in Crimea "will be considered a military aggression."

In Kiev, lawmakers were expected to approve the new government that will face the hugely complicated task of restoring stability in a country that is not only deeply divided politically but on the verge of financial collapse.

Protest leaders said Wednesday that they would propose Arseniy Yatsenyuk as the country's new prime minister. The 39-yearold served as economy minister, foreign minister and parliamentary speaker before Yanukovych took office in 2010. Yatsenyuk is widely viewed as a technocratic reformer who enjoys the support of the U.S.

Deposed Ukrainian president Viktor Yanukovych on Thursday broke five days of silence to declare himself to still be Ukraine's head of state, as sources strongly indicated that he had taken refuge in Russia.

The fugitive president issued a defiant statement through Russia's three main news agencies. He said he wanted Russia to ensure his personal safety and protection from "extremists" and that he still considers himself to be Ukraine's legitimate leader. An unnamed Russian official said that his request was being "satisfied in the territory of Russia," the Russian agencies said.

Yanukovych's comments gave no further clue about his whereabouts. He fled after the riot police killed over 80 protesters in Kiev's central square on Feb. 20, when European and Russian officials intervened. He has not been seen publicly since Saturday, when he said he remained the legitimately elected president, a position that has been backed by Russia. The Russian Foreign Ministry voiced concern Thursday about the Russian-speaking population in Ukraine and vowed to protect their interests. State-owned ITAR-Tass news agency quoted a statement read at a session of the ministry's board on Thursday, saying that Russia "will have a firm and uncompromising response to violations of the rights of compatriots by foreign states."

Russia has accused Ukraine's interim leaders of failing to control radicals who threaten the Russian-speaking population in Ukraine's east and south, which includes the Crimean peninsula. "Dangerous," was how NATO Secretary General Anders Fogh Rasmussen described the takeover of parliament in eastern Ukraine's Crimea region by pro-Russia armed groups. "I am extremely concerned about the most recent developments in Crimea," Rasmussen said in Brussels. "This morning's action by an armed group is dangerous and irresponsible."

Rasmussen urged Ukraine's new leadership to "establish an inclusive political process that reflects the democratic aspirations of the entire Ukrainian people," at the start of talks between NATO Defense Ministers and Ukrainian Deputy Defense Minister Oleksandr Oliynyk. "I urge all parties to step back from confrontation, refrain from provocative actions and return to the path of dialogue," the NATO chief said.