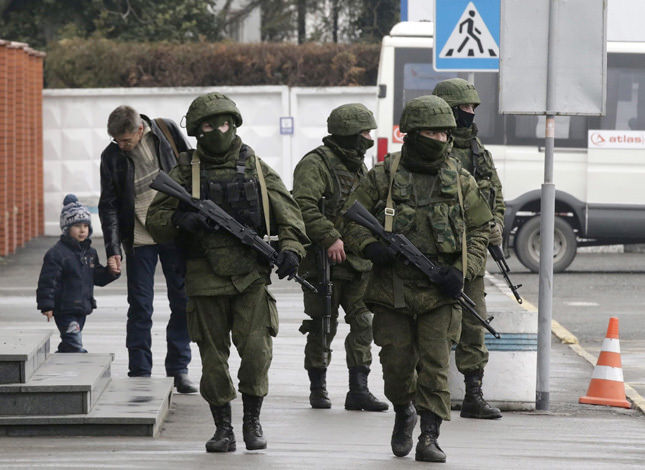 Ukraine (AP)-Russian military were blocking an airport in the Black Sea port of Sevastopol in Crimea near the Russian naval base while unidentified men were patrolling another airport serving the regional capital, Ukraine's new ınterior Minister Arsen Avakov said on Friday.

Avakov wrote in a Facebook post that the Belbek international airport in Sevastopol was blocked by military units of the Russian navy.

"ı can only describe this as a military invasion and occupation," Avakov said.

The Russian foreign ministry refused to comment while a spokesman for the Russian defense ministry was not available for comment.

Early on Friday, dozens of armed men in military uniforms without markings were seen patrolling the airport in Simferopol, the capital of Crimea.

An Associated Press photographer saw military men armed with assault rifles Friday morning patrolling the airport. The men, who were wearing uniforms without any insignia, refused to talk to journalists, and it was not immediately clear who they were.

On Thursday, masked gunmen with rocket-propelled grenades and sniper rifles seized the parliament and government offices in Simferopol and raised the Russian flag over the parliament building.

The events in the Crimea region have heightened tensions with neighboring Russia. ıt scrambled fighter jets on Thursday to patrol borders in the first stirrings of a potentially dangerous confrontation reminiscent of Cold War brinksmanship.

Yanukovych has a news conference scheduled Friday in Russia's south near the Ukrainian border. He has not been seen publicly since Saturday, and he declared Thursday in a statement that he remains Ukraine's legitimate president. Ukraine's parliament on Thursday elected a new government led by a pro-Western technocrat who promptly pledged to prevent any national break-up.

Moscow has been sending mixed signals about Ukraine but pledged to respect its territorial integrity. Russian President Vladimir Putin has long dreamed of pulling Ukraine, a country of 46 million people considered the cradle of Russian civilization, closer into Moscow's orbit. Ukraine's population is divided in loyalties between Russia and the West.

Crimea, which was seized by Russian forces in the 18th century under Catherine the Great, was once the crown jewel in Russian and then Soviet empires. ıt only became part of Ukraine in 1954 when Soviet leader Nikita Khrushchev transferred jurisdiction from Russia, a move that was a mere formality until the 1991 Soviet collapse meant Crimea landed in an independent Ukraine.

ın a bid to shore up Ukraine's fledgling administration, the ınternational Monetary Fund has said it is "ready to respond" to Ukraine's bid for financial assistance. The European Union is also considering emergency loans for a country that is the chief conduit of Russian natural gas to western Europe. Ukraine's finance ministry has said it needs $35 billion over the next two years to avoid default.
Last Update: Feb 28, 2014 3:25 pm
RELATED TOPICS