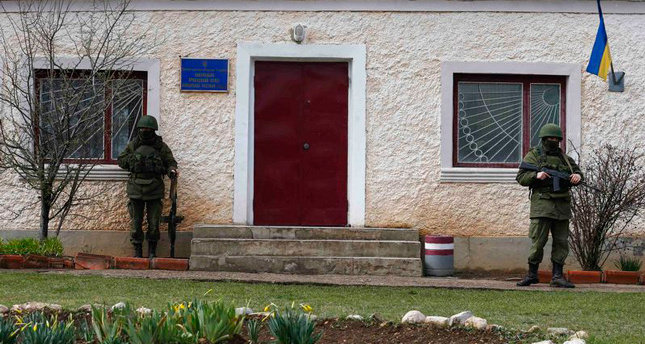 Russian forces go ahead with tightening control over Crimea disregarding U.S. warning of closing the door to diplomatic relations

Russian forces tightened their grip on Crimea on Sunday despite a U.S. warnin to Moscow that annexing the southern Ukrainian region would close the door to diplomacy in a tense East-West standoff.

Russian forces' seizure of the Black Sea peninsula has been bloodless but tensions are mounting following the decision by pro-Russian groups that have taken over the regional parliament to make Crimea part of Russia.

The operation to seize Crimea began within days of Ukraine's pro-Russian President Viktor Yanukovich's flight from the country last month. Yanukovich was toppled after three months of demonstrations against a decision to spurn a free trade deal with the European Union for closer ties with Russia.

In the latest armed action, Russians took over a Ukrainian border post on the western edge of Crimea at around 6 a.m. (0400) GMT, trapping about 30 personnel inside, a border guard spokesman said.

President Vladimir Putin declared a week ago that Russia had the right to invade Ukraine to protect Russian citizens, and his parliament has voted to change the law to make it easier to annex territory inhabited by Russian speakers.

The worst face-off with Moscow since the Cold War has left the West scrambling for a response, especially since the region's pro-Russia leadership declared Crimea part of Russia last week and announced a March 16 referendum to confirm it.

U.S. Secretary of State John Kerry, speaking to Russia's foreign minister for the fourth day in a row, told Sergei Lavrov on Saturday that Russia should exercise restraint.

"He made clear that continued military escalation and provocation in Crimea or elsewhere in Ukraine, along with steps to annex Crimea to Russia, would close any available space for diplomacy, and he urged utmost restraint," a U.S. official said.

President Barack Obama spoke by phone on Saturday to the leaders of France, Britain and Italy and three ex-Soviet Baltic states that have joined NATO. He assured Latvia, Lithuania and Estonia, which have their own ethnic Russian populations, that the Western military alliance would protect them if necessary.

Polish Foreign Minister Radoslaw Sikorski said on Saturday Poland had evacuated its consulate in Sevastopol due to "continuing disturbances by Russian forces".

The United States has announced sanctions against individuals it accuses of interfering with Ukrainian territorial integrity, although it has yet to publish the list. Washington has threatened wider action to isolate the Russian economy.