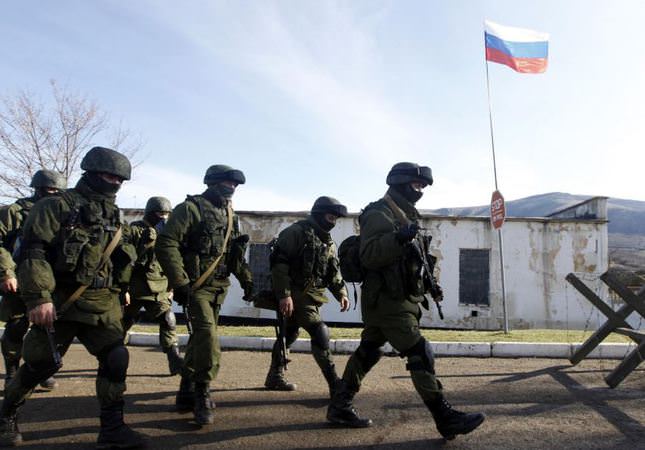 by daily sabah Mar 13, 2014 12:00 am
MOSCOW – A senior Russian lawmaker said military units are occupying positions in Crimea in case of an armed attack from Kiev, in the first apparent admission by Moscow that its forces have occupied the Ukrainian region in a military operation.

President Vladimir Putin has insisted that the uniformed gunmen who are openly patrolling Crimea with military hardware and weapons are local self-defense brigades and even suggested they bought their uniforms in a shop.

"Now there are some military units there who are occupying positions in case there is such resistance, armed aggression, armed expansion from Kiev," the head of the State Duma's committee for relations with ex-Soviet states, Leonid Slutsky, told Echo of Moscow radio station in a late-night interview Wednesday.

"It is not a large-scale military operation," added the lawmaker, who often speaks for the parliament on Ukraine.

Meanwhile, about 8,500 Russian troops are taking part in military exercises near the border with Ukraine involving artillery and multiple rocket launchers, the Russian Defense Ministry said on Thursday.

A statement on the ministry's website confirmed that the exercises had begun at bases in the Southern Military District but did not say how long they would last. The exercises are likely to cause concern in Ukraine because of the political standoff between Kiev and Moscow over Ukraine's Crimea region, which is now in the hands of Russian forces.

Just hours after western leaders jointly warned Moscow against the accession of Ukraine's region of Crimea, the leaders of the U.S. and Ukraine gave an added push for dialogue.

U.S. President Barack Obama and Ukraine's interim Prime Minister Arseniy Yatsenyuk met Wednesday at the White House and appealed to Russia to resume dialogue in order to avoid what Obama called high "costs" if it stays on its current path in Crimea.

Yatsenyuk declared that his government was "absolutely ready and open for talks with the Russian Federation" and urged Moscow to "start the dialogue" without guns and tanks.

"Our Russian partners ought to realize that we are ready to make a new type ... of our relationship, where Ukraine is a part of the European Union, but Ukraine is a good friend and partner of Russia," he said.

Yatsenyuk indicated that within a week or 10 days, Ukraine would sign the political part of a proposed association agreement with the European Union.

"We want to be very clear that Ukraine is and will be a part of the Western world," he said.

Obama extended a face-saving possibility for Moscow, saying that everyone recognizes the close historic ties between Russia and Ukraine.

"There is a constitutional process in place and a set of elections that they can move forward on, that in fact could lead to different arrangements over time with the Crimean region," Obama said.

The leaders of the Group of Seven (G7), the world's seven wealthiest developed countries, earlier warned Moscow that Sunday's hastily called separatist vote in Crimea – which Obama called a "slap-dash referendum" – was illegal and threatened more sanctions if it were to go ahead and if Russia annexed the region.

"It can get ugly fast if the wrong choices are made, and it can get ugly in multiple directions," said U.S. Secretary of State John Kerry.

German Chancellor Angela Merkel and Polish Prime Minister Donald Tusk, who met in Warsaw, said an association agreement between the European Union and Ukraine's new government should be urgently signed. A rejection of such an agreement by Ukraine's pro-Russian government in November set off protests that eventually led to the government's ouster three months later.

The political section of the agreement could be signed as early as Monday's meeting of EU foreign ministers in Brussels, an EU source said on the condition of anonymity.

Preparations are also under way in Brussels to apply EU sanctions against people responsible for developments in Crimea, a decision that could be taken by the foreign ministers Monday and executed as early as Tuesday or Wednesday.

Crimea, an autonomous republic inside Ukraine, has openly rebelled against the government in Kiev after the change of government to a Western-leaning interim administration in late February. Thousands of troops appeared there in uniforms without insignia but were believed to be Russian.
The Crimean parliament on Wednesday backed a declaration of independence to go into force if Sunday's referendum results in a vote for accession to Russia. Under Russian law, annexing parts of a sovereign state is not possible without the country's consent.

Crimea's secessionist authorities said Wednesday that they have partially closed the region's airspace to "keep out provocateurs" in the run-up to the referendum. All flights to and from Moscow were operating normally.