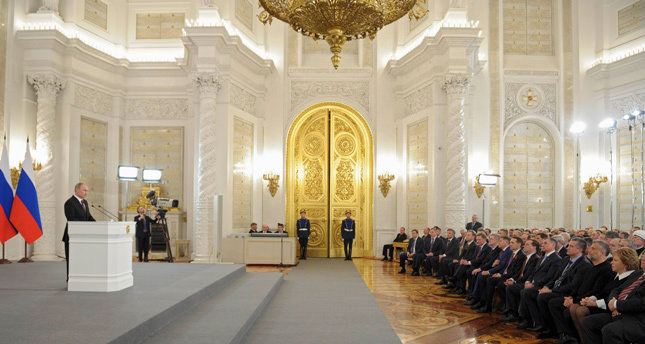 by Mar 18, 2014 12:00 am
MOSCOW – President Vladimir Putin said on Tuesday Crimea was of vital importance to Russia and had always been part of the country in people's hearts and minds.

Defying the West in a speech underlining the historical and cultural links between Russia and the region given to Ukraine by Soviet leader Nikita Khrushchev in 1954, he said a referendum in which Crimea backed union with Russia was legitimate.

"The (Crimean) issue has a vital importance, a historic importance for all of us," Putin said after a standing ovationin an address to a joint session of parliament after approving a draft treaty to make Crimea part of Russia.

"In the hearts and minds of people, Crimea has always been and remains an inseparable part of Russia. This commitment, based on truth and justice, was firm, was passed from generation to generation."

He depicted the Black Sea peninsula, home to Russia's Black Sea Fleet, as a holy place for Russia but said all three main nationalities there would have equal language rights - Ukrainians, ethnic Russians and Tatars.

"It will be right if in Crimea, and I know that Crimeans are supporting this, there will be three equal languages: Russian, Ukrainian and Crimea Tatar," he said.

He criticised the new leaders in Kiev, saying they had opened the way to "neo-Nazis."

"Those who were behind recent events, they were ... preparing a coup d'etat, another one. They were planning to seize power, stopping at nothing. Terror, murder, pogroms were used," he said, calling them "nationalists, neo-Nazis, Russophobes and anti-Semites".

"It is primarily they who are deciding how Ukraine lives today. The so-called Ukrainian authorities introduced a scandalous law on the revision of the language policy, which directly violated the rights of the national minorities."

Putin signed a decree recognising Crimea as an independent state on Monday, one day after it voted overwhelmingly for union with Russia in a referendum which the West said was illegitimate.

The speech was regularly interrupted by applause from an audience which included his government, Kremlin aides, business leaders and Crimean Prime Minister Sergei Aksyonov.