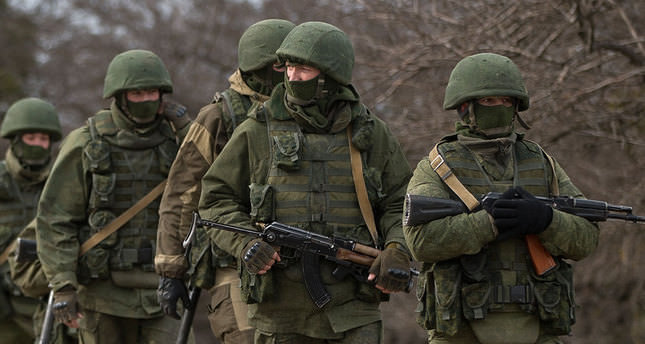 ISTANBUL – NATO Secretary General Anders Fogh Rasmussen acknowledged in an interview with Foreign Policy on Wednesday that Russia's annexation of Crimea "established certain facts on the ground" that would be difficult to change. He said, "Our concern is that Russia won't stop here. There is a clear risk that Russia will go beyond Crimea and the next goal will be the eastern provinces of Ukraine." An invasion of eastern Ukraine, he added, "would have severe consequences."

He declined to say what those might include, though, and stressed that NATO had not begun discussing military options and wanted to de-escalate tensions with Russia.

Ban met Putin as Russia's lower house of parliament voted to approve a treaty the Russian leader signed Tuesday to integrate the Ukrainian region of Crimea with Russia, a move that caused the biggest East-West confrontation since the Cold War. "I am deeply concerned about the current situation involving both Ukraine and Russia," Ban said after the two sat down for talks in the Kremlin.
European Union leaders also met in Brussels yesterday to discuss the Crimean crisis, with possible further targeted sanctions.
The Ukrainian government declared that necessary preparations were made to withdraw Ukrainian armed forces and their families.
Crimean leaders recently signed the agreement on Crimea's integration into Russia.

The agreement has not been recognized by Ukraine, the EU and the U.S.

Renounced by the Western countries, the referendum was held one month after pro-Russia Ukrainian President Victor Yanukovych was removed from power and a pro-Western transitional government took the power. At the beginning of this week, the U.S and the EU agreed to impose sanctions to punish Russia for annexing Crimea.

The crisis broke out last November, when Yanukovych refused to sign the Association Agreement with the EU.

Yanukovych left the country on Feb. 22 after more than 80 people were killed in a crackdown against protesters.

Russia then commenced military interventions and Crimea came under the control of Russian armed forces.

The EU imposed travel sanctions against Moscow on Monday, targeting 21 officers in Russia and Crimea. Their European bank accounts were disabled.

Likewise, the U.S. placed sanctions against 11 officers in both Russia and Crimea. Obama on Thursday announced further sanctions against prominent Russians and cleared the way for possible sanctions on key sectors of theRussian economy in response to Moscow's seizure of the Crimea region from Ukraine.

The U.S. president, speaking at the White House, said Russia's threats to southern and eastern Ukraine posed a serious risk of escalation of the crisis in the region. "We're imposing sanctions on more senior officials of the Russian government. In addition, we are today sanctioning a number of other individuals with substantial resources and influence who provide material support to the Russian leadership, as well as a bank that provides material support to these individuals."

Ganiev confirmed allegations that the Russian armed forces plundered some shops owned by Tatars, adding, "Although officially refuted, these cases unfortunately have been experienced." Ganiev also said Tatars will stand in the face of provocations even if Tatars and Russians come face to face. "There is no ethnical dispute between the Crimean Tatars and Russian people," said Ganiev. "Some disagreements have been observed. Crimean Tatars have enough conscious against the provocations and keep their head. " Europe needs a "determined and united response" to the developments in Crimea, German Chancellor Angela Merkel told parliament in Berlin before travelling to Brussels for talks with her 27 EU counterparts.

Merkel announced that new names would be added to a list of 21 Russians and Crimeans hit this week with EU asset freezes and travel bans, but it was unclear whether the bloc's leaders would expand the measures from individual sanctions to those having national economic effects.