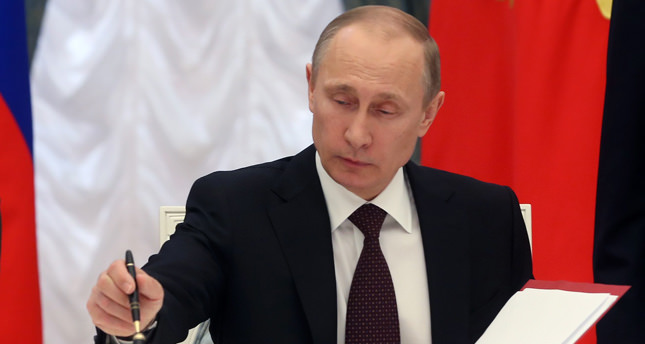 by German Press Agency - DPA Mar 23, 2014 12:00 am
MOSCOW — Russian President Vladimir Putin ordered Russian administration be put into place in newly annexed Crimea by the end of the week.

According to a decree issued Sunday, the police, civil defence, domestic intelligence and other governmental structures must be aligned with Russian law and procedures by Saturday.

Russia already has military control over the formerly Ukrainian peninsula.

The decree came a week after a referendum in Crimea, in which 95 per cent of voters endorsed joining Russia, and two days after Putin signed a treaty sealing Crimea's accession to Russia.

Both Russia's lower and upper houses of parliament, the State Duma and the Federation Council, also approved the annexation, which is
not recognized internationally.

The United States and European Union have imposed economic sanctions against Russia in protest.

On Monday, the Russian rouble is to be introduced in Crimea as an official currency alongside the Ukrainian hryvnia.

Meanwhile, the Ukrainian command and control warship Slavutych was flying the new Crimean colours at the Black Sea Fleet's base at Sevastopol.

More than 70 Ukrainian military bases and administrative centres and more than 30 Ukrainian navy ships have been taken over by Russia
since last week.