US intel warns of Russian invasion of eastern Ukraine 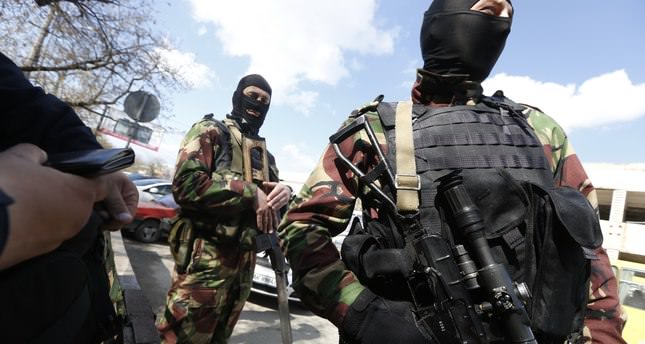 American intelligence agencies told administration officials and key congressional staffers there is mounting evidence Russia is putting the pieces in place for an invasion of eastern Ukraine and that the possibility of an imminent assault cannot be ruled out, according to people with direct knowledge of the matter

MOSCOW — American intelligence agencies told top officials and key congressional staffers there is mounting evidence Russia is putting the pieces in place for an invasion of eastern Ukraine and that the possibility of an imminent assault cannot be ruled out, according to people with direct knowledge of the matter. The number of Russian troops on the border with Ukraine increased since Russia conquered Crimea. Near Ukraine's eastern border, troops are reportedly supplied, which they would need in the event of further operations, a development U.S. intelligence agencies noted with alarm.

On Capitol Hill, U.S. spy agencies gave Congress increasingly dire assessments of Russian activities and indicated the likelihood of an invasion is rapidly increasing, according to a participant in the discussions who spoke on the condition of anonymity.

Further Russian aggression against Ukraine is a distinct possibility after forces stormed into Crimea and took control of the peninsula and then moved to seize Ukrainian military bases in the region, facing practically no resistance. U.S. officials are more and more concerned about a potential domino effect in the region should Russian actions against NATO member countries force the alliance to enter the conflict. "

Our concern is that Russia won't stop [in Crimea]," NATO Secretary-General Anders Fogh Rasmussen told Foreign Policy in an interview last week. "There is a clear risk that Russia will go beyond Crimea and the next goal will be the eastern provinces of Ukraine." President Barack Obama has used a trip to Europe this week to warn Putin in increasingly strong language not to invade eastern Ukraine.

Independent reporting from the region bolsters the intelligence community's assessment that Russia was assembling the necessary troops and military resources to invade if Putin gives the order.

On Thursday, Voice of America reported that the Russian military had established a field hospital in the Bryansk region, about 20 kilometers from the Russia-Ukraine border, and that train cars have been arriving near the border with troop supplies. That could mean that Russian forces are just settling in for a long stay -troops in the field need to be fed, clothed, and tended to when they get sick - without preparing a strike.

However, two officials said that the intelligence warnings have taken on a more alarming tone in part because the CIA failed to predict Putin's Crimea invasion. At the time, some in the intelligence agencies had determined that Russian forces had no intention of invading Ukraine, despite a massive buildup of troops along the border. That missed call has chastened U.S. intelligence analysts and forced them to reassess their judgments about Putin, one official said.

How the spy agencies failed to predict the Crimean invasion has been a subject of considerable debate in recent weeks. Some officials have claimed that leaks about classified intelligence-gathering methods had given the Russians a roadmap for evading America's surveillance nets. A spokesperson for the Office of the Director of National Intelligence said this week that U.S. adversaries "have 'gone to school' on the leaks of how the United States collects foreign intelligence," referring to disclosures by the former National Security Agency contractor Edward Snowden.

But other current and former officials dismissed the suggestion that Snowden's leaks had helped Russian military forces. One U.S. intelligence official, who asked not to be identified when discussing ongoing operations, said that the Russians practiced superb operational security in the run up to the Crimea invasion, and suggested that the reason so little traffic had been intercepted was because Russian forces were smart enough not to discuss their plans over radios and cell phones, channels that could be spied on by the Americans.

If U.S. intelligence agencies underestimated the skill of their Russian adversaries, they seem determined not to repeat that mistake.

Meanwhile, deposed Ukraine president Viktor Yanukovych on Friday called for referendums to be held across the country to determine the future status of every Ukrainian region, instead of presidential elections planned for May 25. "

As president who is with you in thought and soul, I ask every single sensible citizen of Ukraine not to let yourselves be used by the imposters! Demand a referendum on determining the status of every region in Ukraine," Yanukovych said in a statement quoted by Russia's ITAR-TASS news agency.

The comments, his first in over two weeks, came after Crimea voted to become part of Russia in a referendum earlier this month and was then rapidly incorporated into Russian territory.

Yanukovych fled Ukraine for Russia in February and is now reportedly living in a country house outside Moscow, although his two public appearances since have been in the southern city of Rostov-on-Don.

He said he would not recognize presidential polls that are planned to be held on May 25 and the nationwide referendums should be held instead. "

Only a nationwide referendum, and not snap polls, can to a large extent stabilize the political situation and preserve the sovereignty and integrity if Ukraine."

Russian officials including President Vladimir Putin have said that Yanukovych remains the legitimate president of Ukraine and have refused to recognize the pro-West rulers who took over after his fall.

However Putin has also said Yanukovych has no political future and it is not clear to what extent the former president's statements are a reflection of Russian policy.