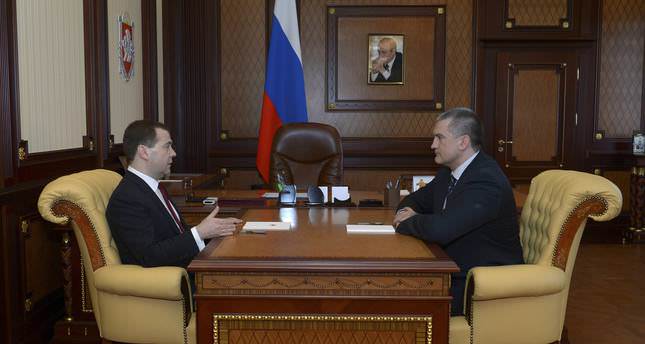 SIMFEROPOL — Prime Minister Dmitry Medvedev flaunted Russia's grip on Crimea yesterday by flying to the region and announcing plans to turn it into a special economic zone, defying Western demands to hand the region back to Ukraine. Russia staged a referendum in the peninsula last month and then anexing it. The move was condemned by world leaders, with U.S. launching financial sanctions on Russians involved.

The visit, hours after Russia held talks on Ukraine with the United States, is likely to anger Kiev and the West, which accuse president Vladimir Putin of illegally seizing the Black Sea peninsula after a March 16 referendum they say was a sham. Shortly after landing in Crimea's main city of Simferopol with many members of his cabinet, Medvedev chaired a Russian government meeting attended by Crimean leaders and outlined moves to revive the region's struggling economy.

"Our aim is to make the peninsula as attractive as possible to investors, so that it can generate sufficient income for its own development.
There are opportunities for this - we have taken everything into consideration," he told the televised meeting, sitting at a large desk with Russian flags behind him. "And so we have decided to create a special economic zone here.

This will allow for the use of special tax and customs regimes in Crimea, and also minimize administrative procedures." In comments that made clear Russia had no plans to give back Crimea, he set out moves to increase wages for some 140,000 state workers in Crimea, boost pensions, turn the region into a tourism hub, protect energy links with the peninsula and improve its roads, railways and airports.
Russia's swift takeover of Crimea, following the ouster of Moscow ally Viktor Yanukovich as Ukraine's president in late February, has caused the biggest crisis in East-West relations since the Cold War.

Medvedev's visit underlined the impotence of the West and Ukraine to force Russia out following the formal annexation of Crimea, signed by Putin, on March 21.

The United States and European Union have imposed sanctions on Russian officials, lawmakers and allies of Putin. They are threatening broader measures if Russia, which has forces massed near Ukraine's eastern border, seeks to take more territory.

The absorption of Crimea and its 2 million residents creates an additional financial burden on Russia, which is struggling with slow growth, rising inflation, a weak currency and unusually high capital flight this year.

But Medvedev's remarks indicated the Kremlin hopes Crimea, which he said had "colossal prospects" for tourism income, will become quickly self-sufficient.

Finance minister Anton Siluanov said last week that Russia would spend up to 243 billion roubles ($6.82 billion) in Crimea this year, to be financed from the budget reserve.

The ultimate cost of its action in Crimea is likely to be far higher: analysts in a Reuters poll last week slashed their forecasts for Russian economic growth. The region has an estimated 55 billion rouble budget deficit, and the peninsula has been dependent on Ukraine for 85 percent of its electricity, 90 percent of its drinking water and much of its food.

The reliability of those supplies is now in question. The local authorities have said they will nationalize Ukrainian state-owned business, including energy producer Chernomorneftegaz which is exploring for oil and gas offshore.

Apart from hosting a Russian naval base, Crimea's biggest industry is tourism as one of the former Soviet Union's few warm seaside resorts.

But until now, 60 percent of visitors arrived from other parts of Ukraine, mostly by train.

Making it an attractive destination for Russians will be more difficult, since they mainly arrive by air and have a wider choice of holiday destinations. Crimea would have to compete with Bulgaria, Turkey, Greece and Egypt, as well as Russia's own brand new $50 billion Black Sea Olympic resort in Sochi.

Kerry said after talks with Lavrov in Paris on Sunday that progress on resolving the crisis over Ukraine depended on a Russian troop pullback from Ukraine's borders.

Moscow has said the buildup is part of Russian military exercises. It wants assurances that Russian-speaking regions in eastern and southern regions of Ukraine have extensive autonomy and wants Russian established as the second state language.