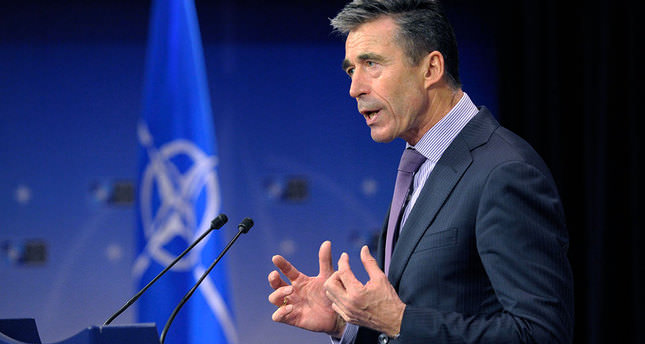 by AA Apr 03, 2014 12:00 am
BRUSSELS — NATO Secretary-General Anders Fogh Rasmussen said on Wednesday that it would be a "historic mistake" if Moscow further intervened in Ukraine after annexing Crimea into the Russian Federation.

"That would lead to further international isolation of Russia," Rasmussen told a press conference after a two-day NATO foreign ministers' meeting in Brussels. NATO chief warned that it would have far-reaching consequences for the relations between Russia and the Western World. "It would be a miscalculation with huge strategic implications," he said.

Rasmussen's remarks came one day after the NATO ministers suspended all "practical" civilian and military cooperation with Russia in response to last month's annexation of Crimea following a contoversial referendum on March 16 in the strategic peninsula. He said they are not discussing military options as they believe in a political and diplomatic solution that as the right way forward. "In order to de-escalate the situation, I urge Russia once again to pull back its troops to live up to its international obligations and engage in a constructive dialogue directly with the Ukrainian government," he added.

As for suspension of all civilian and military cooperation with Russia, Rasmussen said he did not receive any direct Russian reaction but interpreted the latests statements by Moscow that Russia wants to re-establish a Russian sphere of influence, covering the former Soviet space.He said he agreed with the remarks of Supreme Allied Commander Europe (SACEUR) General Philip Breedlove saying that the situation is "incredibly concerning" as Russia has massed all the forces it needs on Ukraine's border if it were to decide to carry out an "incursion" into the country, and it could achieve its objective in three to five days.

"I think General Breedlove just describes realities on the ground. If they [Russians] sincerely want to find a political solution, I think the first step should be to de-escalate the military situation and pull back the troops," he concluded.

On Tuesday, NATO Secretary-General refuted reports that Russia is pulling back its forces from the Ukrainian border, and called Russia's actions unacceptable. Rasmussen stressed that NATO will not hesitate to take more action if necessary, adding that "The world has to understand that we are determined to actively protect our allies and people." Russia unilaterally annexed Ukraine's Crimea peninsula after taking control of the region on February 26-27 when armed gunmen, believed to be Russian Special Forces, seized the regional parliament and the capital Simferopol's airport. In a controversial referendum held on March 16, Crimea voted to secede from Kiev in favor of unification with Moscow.

Russian President Vladimir Putin signed into law a bill that officially incorporated Crimea into the Russian Federation on March 21.