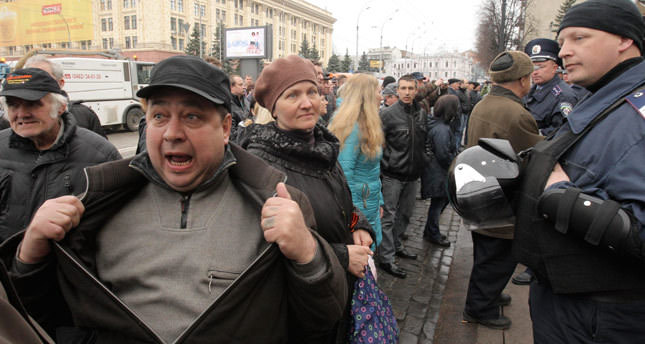 by reuters
Apr 08, 2014 12:00 am
KIEV — Ukraine has launched an "anti-terrorist" operation in the eastern city of Kharkiv and about 70 "separatists" have been arrested for seizing the regional administration building, Ukrainian Interior Minister Arsen Avakov said on Tuesday.

On his Facebook page, Avakov said: "An anti-terrorist operation has been launched. The city center is blocked along with metro stations. Do not worry. Once we finish, we will open them again."

Ukraine's Interior Ministry was quoted as saying by Interfax-Ukraine news agency that those detained were suspected of "illegal activity related to separatism, the organisation of mass disorder, damage to human health" and breaking other laws.

"The need to respect the aspirations of the residents of southeastern Ukraine (and) the inadmissibility of the use of force to respond to legal demands (by protesters) to protect their language, culture and socioeconomic rights was emphasized (from the Russian side)," the ministry's statement said.