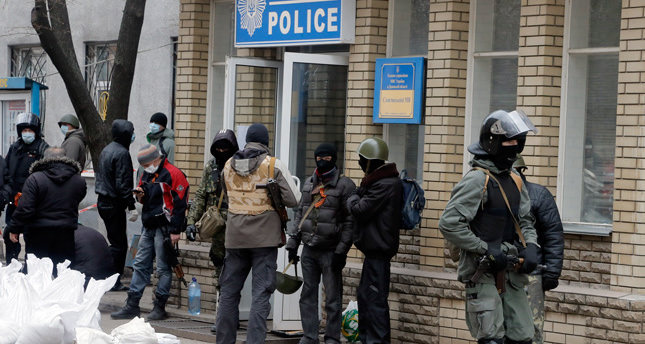 The attack and a failed assault on the prosecutor's office in the local capital Donetsk underscored the volatility of a crisis that EU and US diplomats hope to deescalate when they gather their Moscow and Kiev counterparts for four-way peace talks in Geneva on Thursday.
Ukraine's Western-backed leaders have been under intense pressure from Russia since their February ouster of a pro-Kremlin regime, with Moscow massing troops on Ukraine's border after annexing its Black Sea peninsula of Crimea and nearly doubling the rates it charges Kiev for gas.

Russia is now ready to demand prepayment from the cash-strapped government for future gas deliveries or halt supplies a cutoff that would impact at least 18 EU countries and add further urgency to the worst East-West standoff since the Cold War.

But the siege more immediately highlights how little sway Kiev's untested leaders have over pro-Russians who since April 6 have already been in control of the Donetsk government seat and a state security building in the nearby eastern city of Lugansk.

Ukranian Prime Minister Arseniy Yatsenyuk had visited the region on Friday in a failed attempt to pacify protesters with a vague promise of more sweeping regional rights.

The morning raid on the police station happened in Slavyansk, a riverside town of 100,000 about 60 kilometres (35 miles) north of the regional capital Donetsk.

Ukraine's Interior Minister Arsen Avakov said the attack was led by "armed men in camouflage fatigues" but provided few other details.
"Our response will be very severe," Avakov wrote on his Facebook page.

A local police official told Kiev's private Channel Five television that the assault involved about 20 men who had fired several shots into the air before storming the station.

It was not immediately clear how the local police responded or whether the gunmen had taken any hostages.

But Avakov said that Ukrainian special forces had been dispatched to the scene.

"There is zero tolerance for armed terrorists," he said.

"They are not armed," Tsyplakov was quoted as saying.

But an AFP reporter saw the Slavyansk police station being surrounded by several armed men in masks and camouflage who had set up a road checkpoint that was flying a Russian flag.

Ukraine's interior minister added that a separate group of assailants had also unsuccessfully tried to seize the Donetsk prosecutor's office
"They have all been expelled. The building has been clear of unauthorised personnel," Avakov wrote.

"Another self-declared defence minister has been arrested," he added.

An AFP reporter saw a heavy police presence around the prosecutor's office and the building under apparent government control.
The Donetsk adminstration centre is now under the control of gunmen who have proclaimed the creation of their own "people's republic" and called on President Vladimir Putin to send Russian troops into eastern Ukraine.

The interior minister had on Wednesday issued a veiled 48-hour ultimatum for the Donetsk separatists to lay down their arms or face the possible of use of force.

But no action followed and Russia warned on Friday that any use of force wound result in Moscow boycotting the Geneva talks.

Ukraine's embattled premier had promised during an unannounced visit to Donetsk on Friday to grant more powers to the country's regions and never to clamp down on the east's right to use the Russian language.

Kiev has previously said it was ready to grant more powers to the regions while stopping well short of creating the federation sought by Russia.

But his attempt at mediation failed in part because both the Donetsk and Lugansk gunmen also want to stage independence referendums coinciding with snap presidential polls Ukraine will stage on May 25.

Both Western leaders and Kiev have accused the Kremlin of orchestrating the unrest in order to justify a possible future invasion of eastern Ukraine, a charge Moscow flatly denies.

Kiev said that Ukrainian Foreign Minister Andriy Deshchytsya told his Russian counterpart Sergei Lavrov by telephone on Saturday to "stop the provocative activities of Russian special services in the eastern regions of Ukraine."