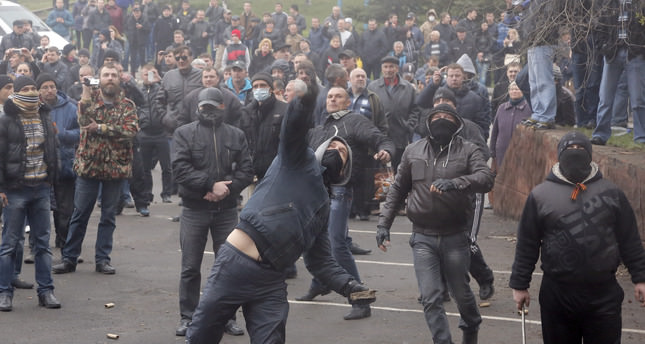 Armed pro-Russian groups attacked a police building in eastern Ukraine as the country's armed forces are ready to regain the initiative by sending units to the region. In many cities in the east of the country, pro-Russian protestors tried to storm local administrative buildings while the U.N. Security Council held an extraordinary meeting on the crisis

HORLIVKA — A pro-Russian mob yesterday seized a police building in yet another city in Russian-leaning eastern Ukraine, defying government warnings it was preparing to act against the insurgents.

Dozens of angry men hurled rocks, smashed windows and broke into a police station in the city of Horlivka, not far from the border with Russia, while hundreds of onlookers cheered them on. Thick white smoke rose from the entrance to the building from which the insurgents hoisted the Russian flag.

The events in Horlivka were the latest sign of trouble in Russian-speaking eastern and southern regions of Ukraine, in which pro-Russian gunmen seized or blocked government buildings in at least nine cities demanding more autonomy from the central government and closer ties with Russia.

Oleksandr Sapunov, one of the men who took part in storming the police building in Horlivka, said the insurgents were fighting against appointees of the Kiev government, including the local police chief, and wanted to appoint leadership of their own. "The people came to tell him he is a puppet of the Kiev junta and they won't accept him," Sapunov said.

One of the insurgents later announced some of the police switched to their side, retained their weapons and will continue serving on the police force. Hundreds of onlookers outside chanted, "Referendum!" and "Russia!"

One man climbed on the roof of the porch to put up a Russian flag. A policeman came through a window to chase him, and the man fell off the roof. Several minutes later, the policeman, his head bloodied, was carried out of the police station to an ambulance.

Acting Deputy Interior Minister Mykola Velichkovych acknowledged Monday some police officers in eastern regions were switching sides. "In the east, we have seen numerous acts of sabotage from the side of police," Velichkovych told reporters.

Kiev authorities and Western officials accuse Moscow of instigating the protests, saying the events echoed those in Crimea, which was annexed by Russia last month. Ever since pro-Russian deposed president Viktor Yanukovych fled to Russia in late February, Russia demanded constitutional reforms that would turn Ukraine into a loose federal state.

After refusing demands for a referendum by separatists in the east, acting President Oleksandr Turchynov indicated Monday holding a nationwide referendum on the country's status was a possibility and such a vote could be conducted on May 25, along with presidential elections. Turchynov expressed confidence that Ukrainians would vote against turning the country into a federation and against its break up.

Meanwhile, a deadline set by the Ukrainian government for pro-Russian gunmen to leave government buildings in eastern Ukraine and surrender weapons passed early Monday, with no immediate sign of any action to force the insurgents out.

Turchynov issued a decree Sunday that protesters who disarmed and vacated government offices in several cities in the Russian- leaning east of the country by 6:00 a.m.

GMT Monday will not be prosecuted. Turchynov vowed that a "large-scale anti-terrorist operation" would take place to re-establish control over those areas and that the fate of the Crimean peninsula, annexed by Russia last month, will not be repeated.

The West accused Moscow of fomenting the unrest. Yanukovych, claimed the Kiev government was coordinating its actions with the CIA.
Russia warned the Kiev government regarding the use of force against the protesters in the east and threatened to cancel an international diplomatic conference on the Ukrainian conflict scheduled for later this week.

Meanwhile, the U.N. Security Council met late Sunday in an emergency session as violence escalated in eastern Ukraine, hours before a Monday morning deadline for pro-Russia protesters to lay down their arms or face Ukrainian troops.

Russia called the meeting shortly after Ukrainian special forces exchanged gunfire Sunday with a pro-Russia militia in an eastern city, and at least one security officer was killed and five others wounded. Ukraine's president accused its powerful neighbor of fomenting unrest and announced that his government would deploy armed forces Monday to quash an increasingly bold pro-Russian insurgency. "At this moment, Ukraine teeters on the brink," Assistant U.N. Secretary General Oscar Fernandez-Taranco told Security Council members.

Fernandez-Taranco said U.N. monitors in eastern Ukraine described seeing proseparatist protesters as being armed with machine guns and sniper rifles. "This is not a war between Ukrainians. This was artificially created," said Ukraine's U.N. Ambassador Yuriy Sergeyev.