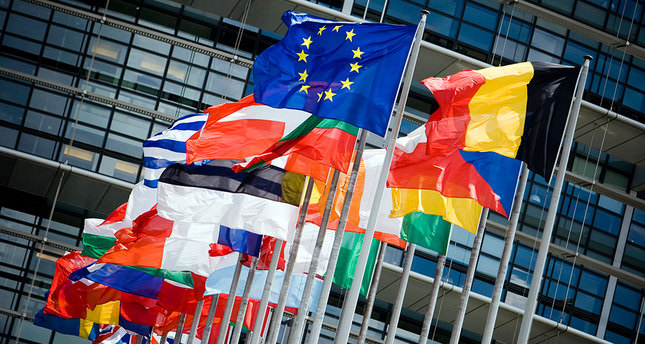 by AA Apr 15, 2014 12:00 am
LUXEMBOURG — The European Union foreign ministers have agreed on Monday that sanctions on Russia are to be expanded if it does not take steps to de-escalate tension in Ukraine's Russian-speaking regions.

At a meeting in Luxembourg, the ministers also added four allies of Ukraine's former president Viktor Yanukovych to the union's list of people subject to asset freezes and visa bans. The names of the four Ukrainian officials have not been released.

The additional sanctions will take effect after being published in EU's official gazette on Tuesday.

The ministers condemned Russia over its involvement in the actions of armed pro-Russian groups occupying government buildings in eastern Ukraine.

Earlier at the meeting, the ministers approved an aid package of $1 billion for Ukraine to help the country overcome its financial problems.

A plan to lower customs duties on Ukrainian goods in a move expected to generate around $500 million a year for the country was also signed off by the ministers.

Ukraine's mostly Russian-speaking east appears to be current flashpoint in the conflict between Russia and the West over Kiev's allegiance.

On Saturday, 20-30 men in Russian-made military fatigues, armed with Kalashnikov automatic rifles and stun grenades, took control of the district police headquarters in the eastern town of Slovyansk.

The West has repeatedly accused Moscow of planning an invasion of Ukraine after Russia invaded and illegally annexed Ukraine's Crimea Peninsula last month.