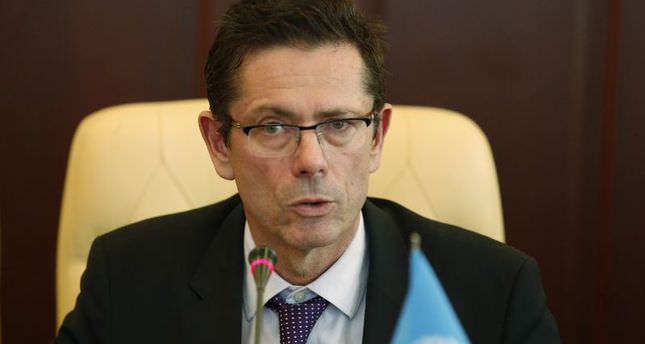 by AA
Apr 17, 2014 12:00 am
UNITED NATIONS — Immediate action should be taken to halt the violence in Eastern Ukraine given the significant human rights implications and those responsible for arming paramilitary groups should be held accountable, the UN Security Council was told Wednesday.

Human rights violations need to be urgently investigated and verified and while Ukrainian security forces have the right to defend their country from disorder and chaos, they must also play their role in maintaining public order in accordance with human rights standards, Ivan Simonovic, the UN's assistant secretary general for human rights said.

"The arming of the protesters and their transformation in to quasi-paramilitary forces must be stopped," Simonovic said. "Anyone inciting violence and providing arms to protesters can be held accountable for the resulting tragic consequences.

There are clear lines between what can be considered the exercise of the right to peaceful assembly and the violent behavior of armed protesters, Simonovic told the council.

The Tatar Mejlis, the body representing the Tatars, has raised concerns about the total lack of public debate as well as the exclusion of Crimean Tatars from the drafting process of the new constitution.

Simonovic said those Crimeans who do not accept Russian citizenship will face obstacles in guaranteeing their property and land rights, access to education and healthcare, and simple enjoyment of civil and political rights.

Simonovic also called for a "meaningful national dialogue" based on the Ukraine's obligations to respect legal international human rights treaties that Kiev has already ratified.