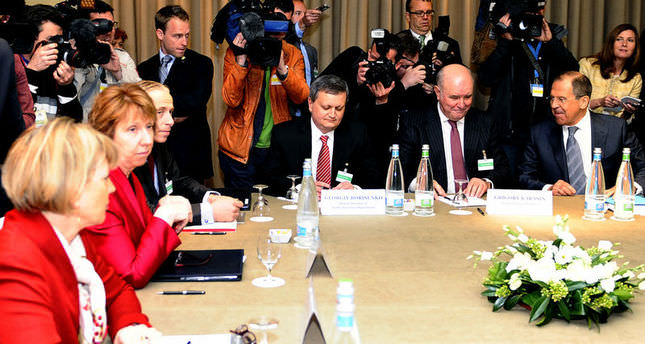 by Apr 18, 2014 12:00 am
GENEVA/MOSCOW — The United States, Russia, Ukraine and the European Union called after crisis talks on Thursday for an immediate halt to violence in Ukraine, where Western powers believe Russia is fomenting a pro-Russian separatist movement.

President Barack Obama said the meeting in Geneva between Russia and western powers was promising but that the United States and its allies were prepared to impose more sanctions on Russia if the situation fails to improve.

Russian President Vladimir Putin, speaking in Moscow, accused Ukraine's leaders of committing a "grave crime" by using the army to try to quell unrest in the east of the country, and did not rule out sending in Russian troops.

Putin said he hoped he would not need to take such a step, and that diplomacy could succeed in resolving the standoff, the worst crisis in East-West relations since the Cold War.

The comments came hours after separatists attacked a Ukrainian national guard base and Kiev said three of them were killed in the worst bloodshed yet in a 10-day pro-Russian uprising.

Ukrainian, Russian and Western diplomats were seeking to resolve a confrontation that has seen pro-Russian fighters seize official buildings across eastern Ukraine while Moscow masses tens of thousands of troops on the frontier.

It was unclear if Russia would meet Western demands for it to stop stirring unrest in the east and withdraw its troops from the Ukrainian border. Moscow denies it is active in Ukraine.

The U.S. State Department said the talks had achieved more than some people had expected.