Tension up in East Ukraine 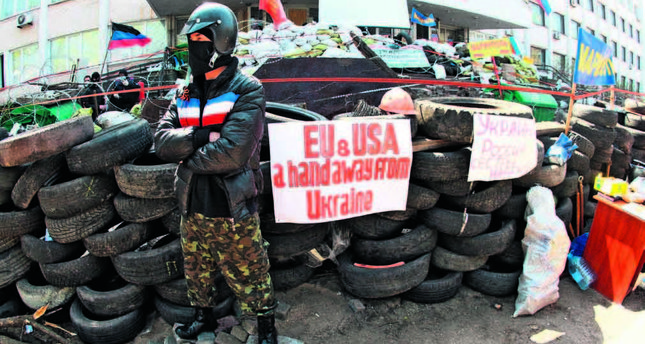 KIEV — Separatists attacked a base of the Ukrainian national guard in an eastern city early Thursday, Kiev said three attackers were killed in the shooting that followed, making it the bloodiest incident so far in a 10 day uprising in the east.

A crowd of around 300 men armed with stun grenades and Molotov cocktails attacked the base, in the south-east part of the country early Thursday, the interior ministry said in a statement. Servicemen inside fired warning shots but the attackers did not stop the assault and the army had to respond, it said. There were no casualties among the Ukrainian servicemen, the ministry said, and 63 attackers were detained. Speaking at the parliament Thursday morning, acting President Oleksandr Turchynov said the pro-Russian gang attempted to storm the base three times and carried automatic weapons.

Footage from outside the base on Thursday night showed an unidentified man who acted as an intermediary coming out of the building to the crowd and speaking to masked men armed with assault rifles. He told them the military asked for 10 minutes to think over an unspecified ultimatum and the masked men said they did not want any bloodshed.

Several minutes afterwards, the crowd, mainly made of masked men young armed with bats and sticks, started throwing Molotov cocktails at the base's gate and trucks parked in front of it. Sounds of gunfire were heard in response.

The skirmishes come after the Ukrainian government announced an operation to retake control of Slovyansk and other cities in the restive east. A well-armed, Russia-backed insurgency has sowed chaos in eastern Ukraine in the past weeks. Militants have taken control of police stations and administrative buildings in at least 10 towns in the region, including Mariupol near the Russian border. With tens of thousands of Russian troops deployed along the border with Ukraine, there are fears the Kremlin might use the instability in the predominantly Russian-speaking region as a pretext for seizing more territory beyond its annexation of Crimea last month.

On Wednesday, throngs of residents in the eastern city of Kramatorsk encircled a column of Ukrainian armored vehicles carrying several dozen troops. Soon after, masked gunmen in combat gear reached the site. Without offering resistance, the Ukrainian soldiers surrendered the vehicles to the militiamen. On the outskirts of Kramatorsk, troops at 14 Ukrainian armored vehicles were surrounded by a crowd of local residents.

To end the standoff, Ukrainian servicemen handed over the magazines from their assault rifles to pro-Russian militia and left. Turchynov told the parliament on Thursday the brigade that laid down its arms will be disbanded and its members will face trial. Ukraine's Prime Minister Arseny Yatseniuk yesterday accused Russian President Vladimir Putin of trying to sabotage the country's upcoming presidential election and said Moscow was responsible for deaths in recent clashes in eastern Ukraine. "Russia is playing only one game: further aggravation, further provocation, because the task, that Putin today officially announced, is to wreck the presidential election on May 25,"
Arseny Yatseniuk told journalists in Kiev.

The latest unrest came as diplomats from Ukraine, the U.S., the European Union and Russia prepared to meet Thursday for the first time over the burgeoning crisis that threatens to roil the new government in Kiev. With Ukraine struggling to contain the pro-Russian uprising, the Obama administration has said it is readying additional sanctions against Moscow and a boost in aid for the Ukrainian military in the coming days.
RELATED TOPICS