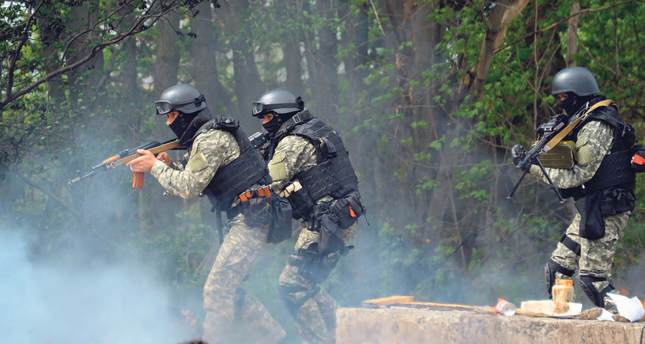 SLOVYANSK,Ukraine— Ukranian government troops moved against pro-Russia forces in the east of the country yesterday and killed at least two of them in clashes at checkpoints manned by the insurgents, the government and insurgents said. Russian President Vladimir Putin decried what he described as a "punitive operation." The fighting was the first since acting President Oleksandr Turchynov on Tuesday ordered the resumption of military operations in eastern Ukraine, where pro-Russia protesters and masked gunmen have seized government buildings and set up checkpoints on the roads.

Putin threatened Kiev with unspecified consequences. "If the Kiev government is using the army against its own people this is clearly a grave crime," Putin said.

The Ukrainian government and many in the West worry that Russia is seeking a pretext for a military intervention in eastern Ukraine. Putin insists he has the right to intervene to protect ethnic Russians, who make up a sizeable minority in Ukraine's east. Russia has tens of thousands of troops arrayed along its side of Ukraine's eastern border.

Earlier in Tokyo, U.S. President Barack Obama accused Moscow of failing to live up to "the spirit or the letter" of an agreement last week to ease tensions in eastern Ukraine.If that continues, he said, "there will be further consequences and we will ramp up further sanctions." The Ukrainian Interior Ministry said in a statement that military and special police forces killed "up to five terrorists" while destroying three checkpoints north of Slovyansk, a city 160 kilometers (100 miles) west of the Russian border that has emerged as the focus of the armed insurgency.One of the government troops was injured, the statement said.

Stella Khorosheva, a spokeswoman for the Slovyansk insurgents, said she could confirm that two pro-Russia fighters had been killed at a checkpoint in the village of Khrestyshche, about 10 kilometers (six miles) north of the city. The situation was quiet inside the city of Slovyansk itself, but Khorosheva said the fighters were ready to repel any attack by government troops. "We will defend ourselves to our last drop of blood. We are ready to repeat Stalingrad," she told The Associated Press, invoking the memory of the Soviet army's victory over German forces in 1942-43.

At least 10 Ukrainian government armored vehicles were seen parked on the road just to the north of Slovyansk, while two helicopters were spotted circling over the area.Troops ordered residents in the surrounding area to keep away.Near the town of Makatikha, several kilometers north of Slovyansk, pro-Russian militia at checkpoints set fire to barricades of car tires in an apparent attempt to reduce visibility from the air. An Associated Press reporter observed about two dozen militiamen manning checkpoints along the road earlier in the day. Interior Minister Arsen Avakov said his forces also have cleared city hall in the southeastern city of Mariupol of the pro-Russia protesters who had been occupying it for more than a week. Local police officials and protesters, however, presented quite another picture of what happened. Avakov wrote in a Facebook post that the Mariupol city hall "has been freed to resume work," but did not describe the action.

However, Yulia Lasazan, a spokeswoman for Mariupol's police department, told The Associated Press that about 30 masked men armed with baseball bats stormed the building in the early hours on Thursday and started beating the protesters. It was not clear why the protesters, some of whom were believed to be armed, did not offer resistance but called the police instead. Five people were taken to a hospital, Lasazan said.

Lasazan said the police were controlling the perimeter and were negotiating with the remaining protesters to leave the building.

Ukraine is going through its biggest political crisis since the fall of Soviet Union, set off by months-long anti-government protests and President Viktor Yanukovych's flight to Russia.

Yanukovych's ouster sparked wide anger in his support base in Ukraine's east. The insurgents, who claim Ukraine's post-Yanukovych government consists of nationalists who will suppress the east's large Russianspeaking population, are demanding regional autonomy or even annexation by Russia.

Ukraine and Russia reached a deal in Geneva last week to defuse the crisis, but pro-Russian insurgents in the east and right-wing militants in Kiev have defied calls for all sides to disarm and to vacate the buildings they are occupying.
SLOVYANSK