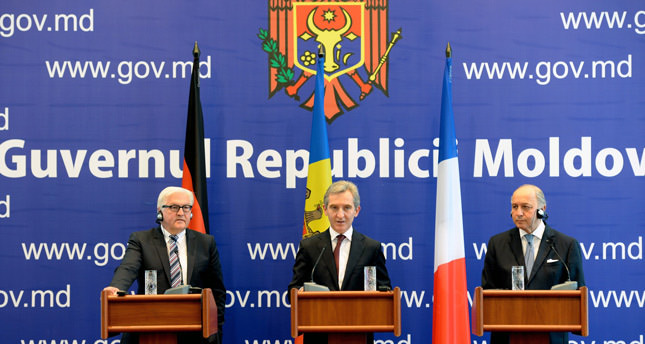 by reuters
Apr 27, 2014 12:00 am
BRUSSELS — Moldovan citizens will no longer require visas to travel to the European Union beginning on Monday, as the bloc presses ahead with deeper ties with east European nations in defiance of Russia.

Moldova, Georgia and Ukraine are all seeking tighter links with the European Union as part of an Eastern Partnership with the bloc, which allows for closer trade and business ties without full EU membership.

In response to the Ukraine crisis, the European Union has said it will accelerate the partnerships and from Monday, all citizens of Moldova with a biometric passport can travel visa-free to Europe's Schengen zone, the European Commission said on Sunday in a statement.

The Schengen zone includes most EU countries and some non-members such as Norway and Switzerland.

Ukraine's quest for EU ties triggered the current crisis in relations with Moscow, dividing the nation between those seeking to look West and those wanting to stay in Moscow's orbit.

Moldova's pro-European prime minister Iurie Leanca has said EU-inspired reforms and visa-free travel for Moldovans are the best hope of resolving the "frozen conflict" of Transdniestria, arguing they would make Moldova more attractive to those in the rebel region.

An official from the European Commission confirmed the visa exemption did not depend on ethnic origins and could include people living in Transdniestria.

A narrow strip of land near the Ukrainian border, Transdniestria has not been recognised by any state as independent, but it is home to Russian troops and half-a-million people - 30 percent of them ethnic Russians - who look to Russia as their patron, much like the ethnic Russian majority in Crimea.

EU partnership deals depend on certain reforms. In its statement, the Commission, the EU executive, said Moldova had reformed its interior ministry, modernised its border police and made progress towards ensuring equality and human rights.