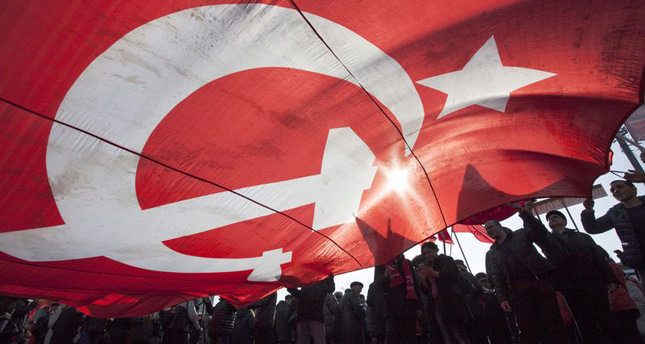 by AA Apr 27, 2014 12:00 am
ANKARA — Polish officials call for a stronger NATO presence in the country amid concerns over Russia's actions in eastern Ukraine, but according to Poland's ambassador in Turkey, "the comeback of the Soviet Union is impossible."

Russia's annexation of Crimea and the military build-up in eastern Ukraine have prompted concerns that Russian President Vladimir Putin has a long-range plan to revive the glory days of the Soviet Union.

"Russia may be thinking about establishing a big zone of political, social and economical influence," said Mieczyslaw Cieniuch. "This zone may be more or less the same as the former Soviet hinterland."

However, in his opinion, a resurgence of the once mighty Soviet Union is impossible.

NATO's presence in Poland and in its eastern neighbors, mainly the Baltic States, should be increased, according to the ambassador, as Russian aggression in Ukraine may spread out of its borders.

Amid growing tension between Ukraine and Russia, Poland's Defense Ministry announced the country would speed up its efforts to build a missile defense system.

"We planned to buy a missile defense system before the Ukrainian crisis," Cieniuch said. "But, of course, the situation in Ukraine sped up the process of building the system."

According to NATO officials, the missile defense system to be build in Poland is designed to counter medium-range missile. Yet the system is not technologically capable of shooting down Russia's advanced intercontinental ballistic missiles.

Who will take part in building the base in Poland is not known yet, "but the tender will be announced soon," said Cieniuch.

The European Union and the Group of Seven have prepared three stages of sanctions against Russia. "We are currently in the second stage, yet it is not fully operational today," the ambassador said.

"The sanctions of course are not against Russian people, they are against the state."

Among the second stage of sanctions there are overseas asset freezes and visa bans on people considered responsible for the escalation.

"A peaceful, stabile and well-developed Ukraine is good for us, and we should keep Ukraine in the European direction," he added.