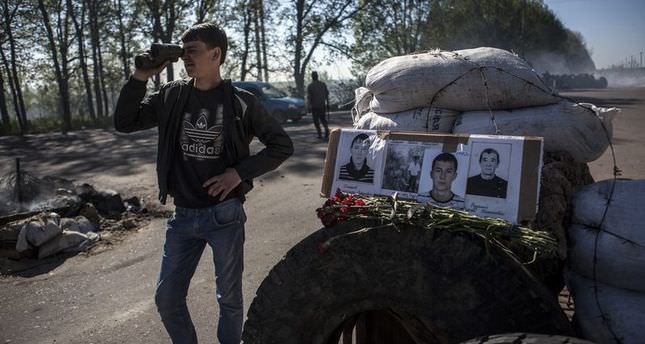 The pro-Western government in Kiev blamed Russia for what it called the kidnapping on Friday of the monitors from the Organisation for Security and Cooperation in Europe (OSCE).
The separatists said they suspected the observers of spying; Ukraine said they were being used as human shields.
Since Ukrainians toppled their pro-Russian president in February, Russia has annexed Ukraine's Crimean peninsula and massed tens of thousands of troops on the country's eastern border. NATO has responded by sending reinforcements to eastern Europe, in the gravest East-West crisis since the Cold War.
Earlier on Saturday the Group of Seven major economies announced they had agreed to impose more sanctions on Russia, which they believe is bent on destabilizing its former Soviet neighbor and possibly grabbing more territory. Diplomats said the United States and the European Union were expected to unveil new punitive action against Russian individuals from Monday.
Russia denies orchestrating a campaign by pro-Moscow militants who have seized control of public buildings across eastern Ukraine. It accuses the Kiev government of whipping up tensions by sending troops to root out the separatists.
The OSCE sent more monitors on Saturday to seek the release of those detained in Slaviansk, a city under the separatists' control. Those being held are from Germany, Sweden, Denmark, Poland and the Czech Republic.
Last Update: Apr 27, 2014 12:32 pm