US sanctions Putin allies as Ukraine violence goes on 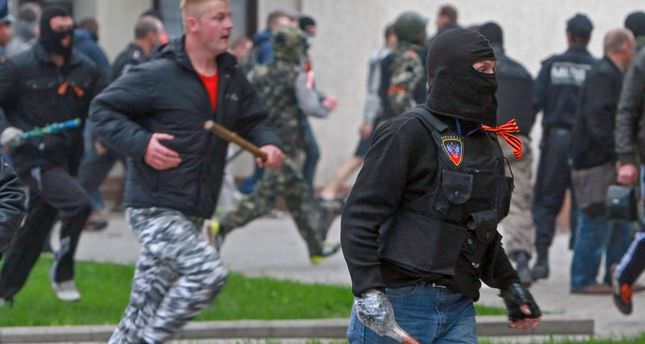 The move to ban visas and freeze assets of the likes of Putin's friend Igor Sechin, head of oil giant Rosneft, also drew fire from President Barack Obama's domestic critics, who called it a "slap on the wrist."

EU states added 15 more Russians and Ukrainians to their blacklist and will reveal them on Tuesday.

The new round of U.S. sanctions, following those imposed last month when Russia annexed Crimea, barely registered in eastern Ukraine, where pro-Moscow rebels were holding a group of German and other OSCE military observers for a fourth day.

Despite a Ukrainian military operation to contain them, the militants extended their grip by seizing key public buildings in another town in the Donetsk region. In the regional capital, Donetsk, club-wielding pro-Russian activists broke up a rally by supporters of the Western-backed government in Kiev.

The high-profile mayor of Kharkiv, Ukraine's second city, was badly wounded by a gunman, raising fears of further unrest in a Russian-speaking region that has seen less trouble of late than the neighboring provinces of Donetsk and Luhansk.

U.S. sanctions were aimed, Washington officials said, at "cronies" of Putin. Seven men, including Sechin, were targeted by visa bans and freezing of any U.S. assets, and 17 companies were also named.

Washington will also deny export licenses for any high-technology items that could contribute to Russian military capabilities and revoke any existing export licenses that meet these conditions, the White House said.

In addition to Sechin, the Russians sanctioned by the United States included another Putin ally, Sergei Chemezov, head of Rostec, a Russian state-owned high-tech products company.

Not included was Gazprom chief Alexei Miller, a close ally of Putin who had been seen as a possible target.

Obama is under pressure from opposition Republicans at home to move faster on sanctions. But in taking what he described as "calibrated steps", he has emphasized a need to act in concert with European countries, which have more at stake economically and a more cumbersome process for taking decisions.