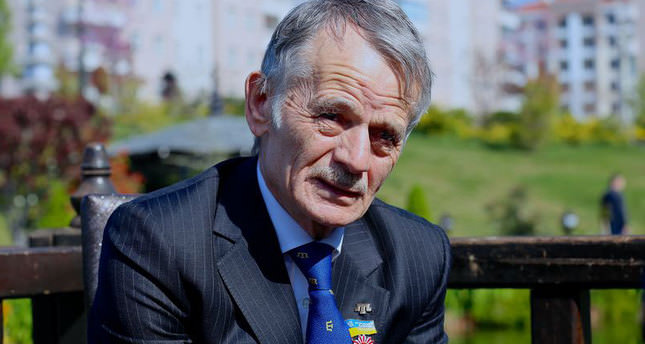 Kırımoğlu (Dzhemilev) said that those who do not want Russian citizenship will be treated as foreigner and will have no right to employment or the right to vote. "The biggest issue is that our people are compelled to be Russian citizens, which many do not want to accept."

He added that the Crimean Tatars do not want to be under Russian domination but feel powerless, and he accuses Russia of taking advantage of Ukraine's current political situation to occupy Crimean soil.

On March 16, 98 percent of the voters who turned out, voted to secede from Kiev in favor of unification with Moscow in a controversial referendum.

Crimean Tatars wish to stay as an autonomous republic inside Ukraine stated the leader and underscored, "There are also problems in Ukraine's democracy which cannot be compared to those in Russia. Therefore, it will be hard for our people to adopt to an authoritative and totalitarian country [referring to Russia]."

Kırımoğlu praised Turkey's policy on its non-recognition of Russia's annexation of the Crimean region and Ukraine. However, he stressed that Turkey has strong ties with Russia on natural gas with a trade volume amounting to $40 billion, but should trade cease with Russia, it would mean a great loss to Turkey's economy.

The Crimean Tatars make up roughly 13 percent of Crimea's 2.1 million population. In 1944, they were deported en masse to Central Asia by Moscow and only returned to Crimea as the Soviet Union collapsed in the late 1980s.