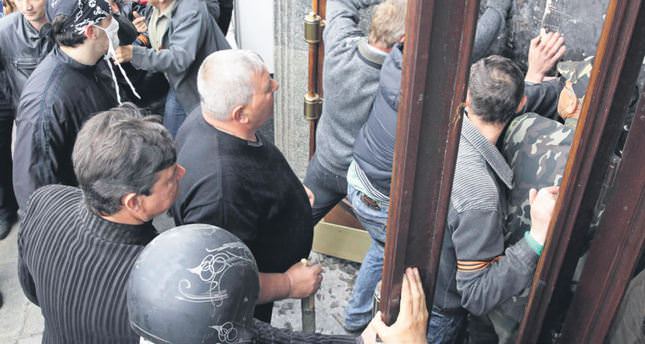 The European Union announced asset freezes and travel bans on 15 Russians and Ukrainians over Moscow's actions in Ukraine, but the measures were seen as less aggressive than sanctions imposed this week by the United States

BRUSSELS — The EU list published yesterday included senior Russian politicians but did not extend to companies, several of which were singled out by Washington when it extended its sanctions list on Monday.

Moscow immediately denounced the new EU measures, saying the Europeans were simply doing Washington's bidding and should be ashamed of themselves. A senior Russian politician said Moscow was working on measures to counter the new sanctions.

But while the Russian stock markets rallied after the announcement of less stringent EU sanctions than were expected, there were increasing signs that the Ukraine crisis was having an effect on key parts of the Russian economy. Russian natural gas exporter Gazprom said further sanctions could disrupt gas sales to Europe and hit its business, while a Russian minister said U.S. restrictions on high-tech exports to Russia would be a blow to Russian companies in the sector.

The International Monetary Fund said it was preparing to cut its forecasts for Russian growth for the second time in less than a month. U.S. credit card firm Visa said it would suspend network services to two Russian banks sanctioned on Monday by the United States.

Those sanctioned by the EU included Russian deputy prime minister Dmitry Kozak, Ludmila Shvetsova, a deputy speaker of the lower house of parliament, Valery Gerasimov, chief of staff of Russia's armed forces, as well as separatist leaders in Ukraine.

But the list did not include the heads of Russian energy giants such as Rosneft's Igor Sechin, who had been included in the latest U.S. sanctions.

The decision brings to 48 the number of people that the EU has put under sanctions for actions it says have undermined Ukraine's territorial integrity.

Russia annexed the Crimea region after Ukraine's pro-Moscow president was ousted in February by protesters demanding closer links with Europe. Kiev and the West accuse Russia of stirring up a separatist campaign in the east, a charge Moscow denies.

On Monday, the United States imposed sanctions on 7 Russians and 17 companies linked to Russian President Vladimir Putin.
The United States has been more aggressive in the penalties it has imposed on Russia than has the European Union, which depends heavily on Russia for energy and has close trading links. The EU has only sanctioned individuals, not companies.

The Russian Foreign Ministry said the EU sanctions would not ease tensions in Ukraine, where the Kiev government is struggling to rein in pro-Russian separatists. "Instead of forcing the Kiev clique to sit at the table with southeastern Ukraine to negotiate the future structure of the country, our partners are doing Washington's bidding with new unfriendly gestures aimed at Russia," the ministry said.

Meanwhile, hundreds of pro-Russian separatists stormed the regional government headquarters in Ukraine's eastern city of Luhansk yesterday, unopposed by police, and the Ukrainian government said they also planned to seize the local television center. The government in Kiev has all but lost control of its police forces in parts of eastern Ukraine, where pro-Russian activists have seized buildings in the region's second biggest city of Donetsk and several smaller towns.

"The regional leadership does not control its police force," said Stanislav Rechynsky, an aide to Interior Minister Arsen Avakov. "The local police did nothing."

He added that the ministry had information that they would next try to take the local television centre.

Video footage showed men, some dressed in green camouflage fatigues and holding shields, walking around what appeared to be the foyer of the building as hundreds massed outside the building's large wooden doors.

Pro-Russian separatists had previously occupied only the local security services' building in Luhansk, which they took in early
April.