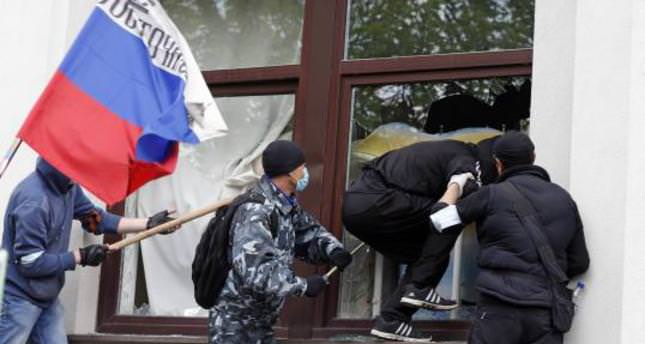 by Apr 30, 2014 12:00 am
LUHANSK, Ukraine — Hundreds of pro-Moscow separatists stormed government buildings in one of Ukraine's provincial capitals on Tuesday and fired on police holed up in a regional headquarters, a major escalation of their revolt despite new Western sanctions on Russia.

New US and EU sanctions packages, announced with fanfare, were seen as so mild that Russian share prices rose in relief. A small number of names were added to existing blacklists, while threats to take more serious measures were put on hold.

Demonstrators smashed their way into the provincial government headquarters in Luhansk, Ukraine's easternmost province, which abuts the Russian border, and raised separatist flags over the building, while police did nothing to interfere.

As night fell, about 20 rebel gunmen opened fire with automatic weapons and threw stun grenades at the headquarters of the region's police, trying to force those inside to surrender their weapons, a reporter at the scene said.

The rebels also seized the prosecutor's office and the television center.