More than 40 killed in fire, clashes in Odessa, Ukraine 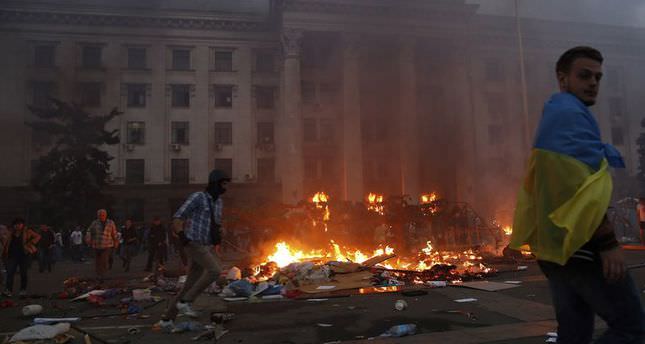 by May 02, 2014 12:00 am
KIEV — More than 40 people were killed in Odessa on Friday, most caught in a building set on fire after pro-Russian activists and supporters of Ukrainian unity fought running battles across the southern port city.

In the worst violence in the Black Sea port since President Viktor Yanukovich was ousted in February, police said 38 people had choked to death on smoke or were killed when jumping out of windows after the trade union building was set on fire.

The opposing sides in a battle that is being repeated in other parts of Ukraine, especially in its east, have clashed before in Odessa, but the violence has never before resulted in deaths. Some residents say they fear some may now seek retribution.

Earlier, the police said at least four men had been killed in fighting after a march by the pro-Kiev demonstrators was ambushed. Petrol bombs, paving stones and explosive devices were thrown during the clashes, they said.

Waving the blue and yellow Ukrainian flag, wearing helmets and holding batons, thousands of Ukrainians took to the streets to march in support of the European path taken by Kiev. Some were supporters of the local football team, Chornomorets.

In an attack tinged with football rivalry, pro-Russian activists, many wearing the colors of team Metalist from the eastern Kharkiv region, waded into the crowd.

Ukraine's new pro-Western leaders have accused Moscow of supporting pro-Russian groups to try to destabilize a country desperately trying to recover from months of upheaval that led to the toppling of Yanukovich.

The Kremlin denies playing any role in the uprisings in the east and south of Ukraine, saying Russian-speakers there are simply protecting their rights against possible assault by Kiev's pro-Western leaders.