The US and Western countries help to reinforce Ukraine's hand 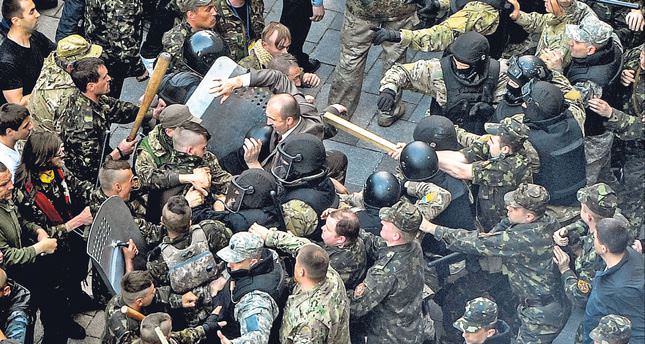 The increasing diplomatic pressure from the states and Western countries leaves limited space for Russia's actions in the Ukraine crisis. The recent developments indicate Ukraine strengthened its position over Crimea while having significant economic and political support from the West and the U.S.

ISTANBUL — The Western countries' diplomatic support for Ukraine is indicative of escalating tension between the West and Russia.

During the phone conversation between Russian President Vladimir Putin and German Chancellor Angela Merkel, she wanted Putin to help free military observers from the Organization of Security and and Cooperation in Europe (OSCE) who are being held by pro-Russian militia as of April 25. How Putin will react to Merkel's appeal for freeing OSCE observers would be seen as an issue of concern for future developments.

Along with the Merkel-Putin dialogue, U.S Secretary of State John Kerry's recent statement at the Atlantic Council, a think tank promoting cooperation between North America and Europe, makes Ukraine a top priority among NATO allies. "NATO territory is inviolable. We will defend every single piece of it," said the U.S secretary of state. He also stated that there is no way to "change the security landscape of eastern Europe." Meanwhile, at the same conference, U.S Vice President Joe Biden emphasized the importance of Ukraine's national sovereignty by stating that Russia should not continue to violate "the fundamental principle that European borders cannot be changed by either political threats or military might."

The Russian occupation of Crimea and the subsequent destabilization of eastern Ukraine received several reactions from European allies to strengthen its diplomatic hand. The tentative measures taken by the West and the United States are only composed of the isolation of Russia from a G-8 meeting and suspension of Moscow's membership. It seems that Russia has not taken a step back from opposing the West's moves in the Ukraine crisis. However, the problem for the West is that the isolation principle applied to Russia is impossible to work as Russia becomes one of the five permanent members of the Security Council of United Nations and a member of the World Trade Organization. This would only allow the Western countries to take bilateral actions toward Russia while making it harder to take joint action. It should be noted here that the joint action of the West has not had any effect so far as their tacit concession of the Crimea issue remained unsolved for the time being. However, the bilateral actions have been appreciated by Western-affiliated groups in Ukraine. Regarding these measures taken by the West, it seems that there have been no positive sign to ease the ongoing tension in Ukraine. The protest in the city of Lugansk in eastern Ukraine shows that there is much tension that makes it almost impossible to take under control. On Tuesday, pro-Russian protesters gathered and took control of the government building. They also replaced the Ukrainian flag with the Russian tri-color. "A regional administration building has been taken by storm," said an activist at the protest. The protest at Lugansk demonstrates that the Kiev government has still been in need of significant help from its Western allies.

With regard to the past diplomatic measures of the West and the United States, the International Monetary Fund (IMF) announced that it will provide significant funding between $14 billion (TL 29.5 billion) and $18 billion over two years. Apart from political tension, the Kiev government passed through a difficult economic period. The government needs economic reforms to be able to pay its external debts in coming years. As it is highly conceivable that the strong economy would allow the Kiev government to maintain the status quo. The recent IMF's action shows that the overall diplomatic and economic assistance of the West to Ukraine strengthen its Kiev government's hand against Russia. However, the ongoing tension proves that the Kiev government needs so much assistance to ease disorder in coming months.