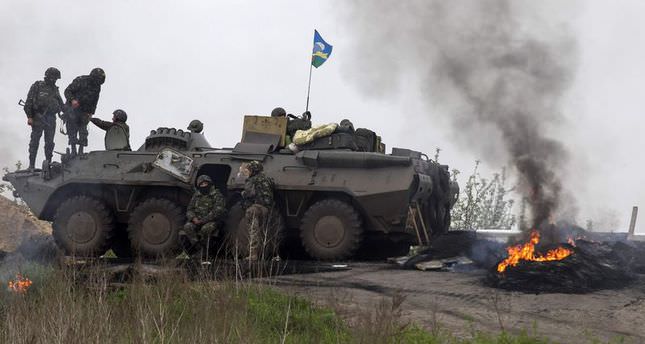 by Associated Press May 02, 2014 12:00 am
SLOVIANSK — Ukraine launched what appeared to be its first major assault against pro-Russian forces who have seized government buildings in the country's east, with fighting breaking out Friday in a city that has become the focus of the insurgency. Three deaths were reported in early fighting.

Russian President Vladimir Putin's spokesman said the offensive "effectively destroyed the last hope for the implementation of the Geneva agreements" which were intended to defuse the crisis.


Two Ukrainian helicopters were shot down and their pilots killed, both sides said. The Ukrainian Security Service said one of the helicopters was shot down with a surface-to-air missile, which it said undercut Russia's claims that the city is under control of civilians who took up arms.


The action came a day after Putin said that Ukraine should withdraw its military from the eastern and southern regions of the country. Russia has massed tens of thousands of troops along the Ukrainian border as it warns Ukraine's military not to move against the insurgents in the east.

The center of Slovyansk appeared quiet but empty and tense Friday morning.

The armed element of the insurgency is focused on Slovyansk, a city 160 kilometers (100 miles) west of Russia in which seven European military observers from the Organization for Security and Cooperation in Europe remain held by pro-Russia gunmen.