Merkel's visit to the US determines Europe's future 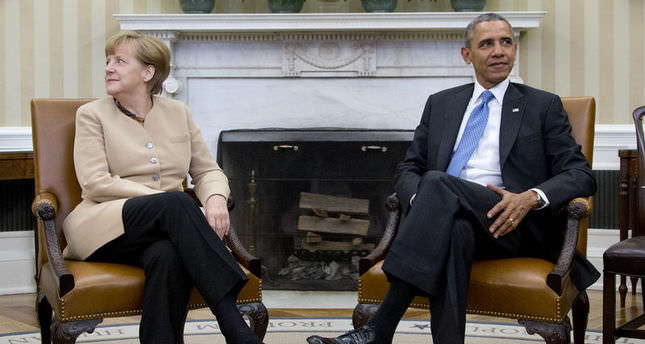 by Begüm Tunakan May 03, 2014 12:00 am
ISTANBUL — German Chancellor Angela Merkel's two-day trip to Washington is a precursor to rebuilding strong unity between the EU and the U.S. President Barack Obama will meet Merkel in the Oval Office at the White House, holding a morning meeting and a press conference. During her short visit, it is expected that both leaders will give top priority to sanctions against President Vladimir Putin to pull back his forces from Ukraine's Crimea region. Both leaders call on Russia to end the separatist violence going on in the countries' east, to maintain fair democratic elections and to protect the rights of ethnic groups residing in that region. Accusing Russia of supporting and coordinating the separatist movement in eastern Ukraine, both leaders have come to the conclusion that a strong economic and political alliance should be strengthened between the U.S. and the EU. Merkel's visit can prove that a unified position between Obama and Merkel can strengthen their sanctions against Russia.

This prospective unified position between Merkel and Obama was strained slightly as a result of spying claims at the beginning of 2014. Leaks from U.S. National Security Agency (NSA) analyst Edward Snowden show that the U.S. monitored the telephone communications of many foreign leaders. Merkel, whose phone was monitored by the NSA, showed her resentment and called other European allies to be aware of this situation.Ever since, the NSA's reported spying on Germany has stayed on her agenda, claiming top priority in her speeches. It is believed that despite the crisis in Ukraine topping both leaders' agendas, Merkel will not end her trip without mentioning the spying claims. However, it should not affect the overall atmosphere that they both try to establish.

President Obama's concerns over Russian occupation of Crimea will reflect itself in upgrading military capabilities and intensifying transatlantic trade agreements. Speaking at the Palais des Beaux-Arts in Brussels, President Obama stated that much effort must be given to intensify the relationship between Europe and the U.S., while calling on Europeans to take significant action over the Ukrainian crisis. It is expected that President Obama wants to regulate trade negotiations, while bringing forward the Transatlantic Trade and Investment Partnership (TAFTA), a proposed trade agreement between the U.S. and the European Union. In 2013, negotiations between the European Commission and the U.S. government started with no results.Obama would like to accelerate negotiations, as Merkel, the leader of Europe's strongest economy, and a key American ally on global economics, can be seen as a significant ally in forming a strong alliance against Russia.

Merkel's short visit will determine whether a strong alliance can be successful in taking joint actions and measures against Putin's Russia.