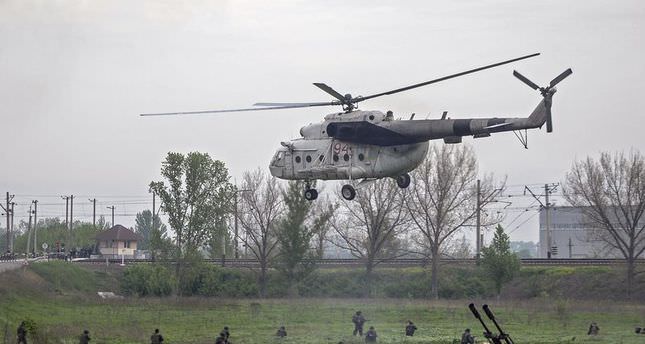 Pro-Russian rebels shot down two Ukrainian helicopters, killing two crew members, as troops tightened their siege of separatist-held Slaviansk in what Moscow called a "criminal" assault by Kiev that wrecked hopes of peace

SLAVIANSK — Pro-Russian militia in control of several regions of eastern Ukraine downed two helicopters, damaged a third belonging to the Ukrainian military and killed two soldiers. As Ukraine tries to dislodge the rebels, Russian President Vladimir Putin and other Russian officials condemned Ukrainian measures and called for a Ukrainian withdrawal.

Two Ukrainian troops were killed when two helicopters were shot down over the separatistheld eastern town of Slaviansk, the Defense Ministry said on Friday.

President Vladimir Putin's spokesman said the Kremlin was "extremely worried" that it had not heard from an envoy Putin had sent to the eastern city to help free foreign hostages. He said the "punitive operation" mounted by Ukrainian forces had destroyed a peace plan agreed with Western powers two weeks ago.

The Ukrainian Defense Ministry said in a statement that two Mi-24 helicopter gunships were shot down by shoulder-launched anti-aircraft missiles while on patrol overnight around Slaviansk, a city that rebels have turned into a heavily-fortified stronghold.
Two airmen were killed and others wounded. The attack helicopter normally has two crew but can carry more.

Other Ukrainian officials and the separatist leader in Slaviansk had said earlier that one airman was taken prisoner.

A third helicopter, a Mi-8 transport aircraft, was also hit and a serviceman wounded, the Defense Ministry said. The SBU security service said this helicopter was carrying medics.

Eight hours after Reuters journalists in Slaviansk heard shooting break out and saw one helicopter opening fire, the city of 130,000 was quiet, with shops shut and armed separatists in control of the streets while Ukrainian forces in armored vehicles had taken up positions on the outskirts of town.

Ukrainian officials said troops overran rebel checkpoints around the city in an operation launched before dawn and it was now "tightly encircled". They pointed to the heavy fire that hit the helicopters as proof of the presence of Russian forces, despite repeated denials from Moscow that it has troops on the ground or is controlling the uprising.

Meanwhile, a spokeswoman for the separatists, Stella Khorosheva, said earlier that at least one activist was killed and another injured during the assault by government forces on roadblocks outside Sloviansk.

Putin's spokesman heaped blame on the Ukrainian government, which took power two months ago after pro-Western protests forced the Kremlin-backed elected president to flee to Russia.

Noting that Putin had warned before that any "punitive operation" would be a "criminal act", Dmitry Peskov told Russian news agencies that this was what had now happened at Slaviansk, where separatists seeking independence or annexation by Moscow are holding seven foreign European military observers.

Saying Putin had sent an envoy, Vladimir Lukin, to south east Ukraine to negotiate their release, Peskov said that Lukin had not been heard from since the Ukrainian operation began. "While Russia is making efforts to de-escalate and settle the conflict, the Kiev regime has turned to firing on civilian towns with military aircraft and has begun a punitive operation, effectively destroying the last hope of survival for the Geneva accord," he said, referring to a deal on April 17 signed by Russia, Ukraine, the United States and the European Union.

Under that agreement, separatists were supposed to lay down their arms and vacate the public buildings they have seized in about a dozen towns they have seized across the Russian-speaking east. Since then, however, they have tightened their grip.
Gunmen in Slaviansk said they were holding their ground against Ukrainian forces that have struggled to assert control over the past month. Some threw up new barricades of felled trees. And dozens of civilians blocked a road against a unit of Ukrainian armored vehicles, telling troops to go home.

Meanwhile, an insurgent spokeswoman said that, three pro-Moscow rebels and two civilians were killed Friday in a Ukrainian military offensive on the flashpoint town of Slavyansk.

The count added to one given earlier by Ukraine's defense ministry, which said it lost two servicemen when the rebels shot down two of its helicopters in the operation -- bringing the overall death toll to seven.
Speaking about the situation in the country, EU foreign policy chief Catherine Ashton said on Friday it was crucial to see a reduction in violence and the occupation of buildings in crisis-stricken Ukraine.

"It is absolutely vital, as I have said to everyone, that we see the functioning of the Rada, the parliament, as being the place where all representatives of Ukraine can work together." Steinmeier called for the urgent implementation of the deal struck in Geneva last month between Ukraine, Russia, the United States and the European Union to ease tensions in Ukraine.