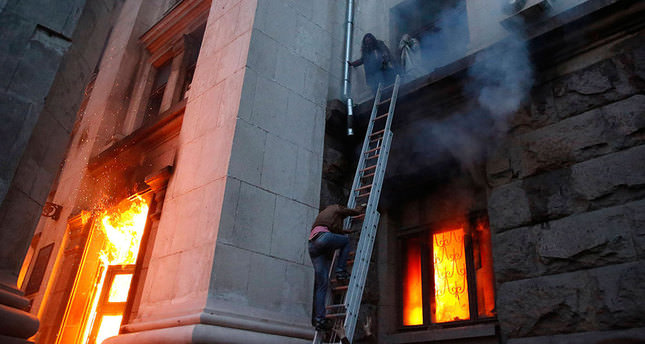 by AA May 04, 2014 12:00 am
ODESSA, Ukraine — The death toll from the building in Odessa, set on fire during clashes between pro-Ukrainian and pro-Russian groups, has risen to 46, Igor Borshulyak, prosecutor for the Odessa region said Saturday.

Borshulyak added that around 200 people have also been injured including 20 police officers during the clashes and fire in the House of Trade Unions building.

There have also been reports that Vyacheslav Markin, a deputy of Odessa's regional council died in hospital after the clashes.

Ukraine has declared two days of mourning after the bloodshed and the interior ministry has announced the detention of 160 people in connection with the clashes.

According to Odessa's security forces, the fire broke out as pro-Russian militants, and football fans rallying in support of Ukrainian unity fought in the center of the city.

One group took shelter in the union building, but became trapped when another group attacked the building with Molotov cocktails, which started the fire.

Most trapped inside the building were poisoned by smoke while some died jumping off the building in a bid to escape the inferno, according to the police.

Government buildings and police stations in several eastern Ukraine cities remain under the control of armed pro-Russia groups, including a prosecutor's office building in Donetsk. The Ukrainian government launched an operation on Friday to regain control in restive cities.

Authorities said many insurgents had been killed, wounded or arrested during the operation.

Elsewhere, at least ten people have been killed and 40 others wounded in clashes in the eastern city of Slavyansk Saturday, said Pro-Russian leader Vyacheslav Ponomaryov.

Ukrainian military forces have also launched an operation Saturday against pro-Russian separatists in Kramatorsk taking control of a security building.