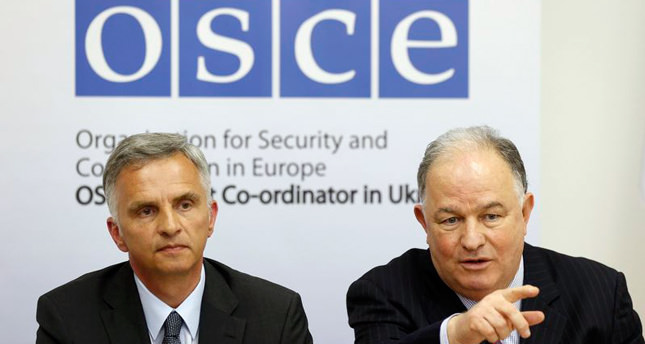 by AA May 04, 2014 12:00 am
ANKARA — Ertuğrul Apakan, the chief monitor from the Organization for Security and Co-operation in Europe (OSCE) Special Monitoring Mission in Ukraine called Saturday for an immediate halt of the ongoing violence in the country.

Apakan said in a statement that the situation in the east of Ukraine had deteriorated in the last 24-hours, but that the organization was delighted at the release of the military observers held hostage since Friday 25 April.

He expressed also his sadness for those killed in a burning building that was set on fire during clashes between pro-Ukrainian and pro-Russian groups in the city of Odessa.

OSCE Chairperson-in-Office and Swiss Foreign Minister Didier Burkhalter reiterated that the situation in eastern and southern Ukraine was dire saying that "joint efforts to stop this escalation and to find a way back to dialogue have to be undertaken."

Meanwhile Turkey's Foreign Ministry offered it's condolences to the victim's families and wished a fast recovery for those injured in the building fire in Odessa.

Forty-six people have now died in a building that was set on fire during clashes between pro-Ukrainian and pro-Russian groups in southern port of Odessa.