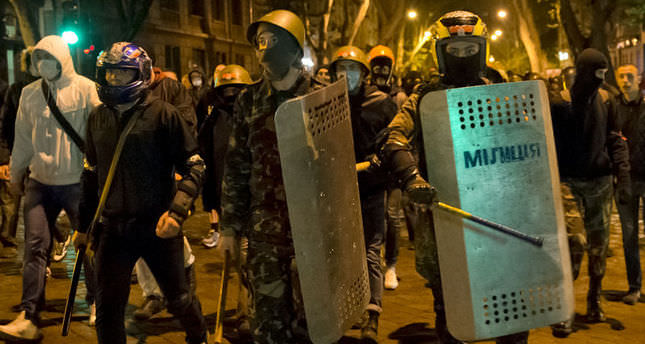 by May 05, 2014 12:00 am
SLAVIANSK, Ukraine — A Ukrainian military helicopter was shot down near the pro-Russian rebel-controlled eastern town of Slaviansk on Monday, but the pilots survived, the Defense Ministry said.

The helicopter, an Mi-24, which came under fire from a heavy machine gun, crashed into a river. The ministry said in a statement the crew were evacuated to a nearby camp but did not give any detail of their condition.

Ukrainian troops fought pitched gunbattles Monday with a pro-Russia militia occupying an eastern city, and the government sent an elite national guard unit to re-establish control over the southern port city of Odessa.

The twin moves reflected an apparent escalation of efforts to bring both regions back under Kiev's control. Any possible loss of Odessa in the west and parts of eastern Ukraine could leave the sprawling country landlocked, cut off entirely from the Black Sea. Russia has already annexed a significant part of Ukraine's Black Sea coast in grabbing back the peninsula of Crimea.

Associated Press reporters heard gunfire and multiple explosions Monday in and around Slaviansk, a city of 125,000 that has become the focus of the armed insurgency against the new interim government in Kiev.

Ukraine is facing its worst crisis in decades as the polarized nation of 46 million tries to decide whether to look toward Europe, as its western regions want to do, or improve ties with Russia, which is favored by the many Russian-speakers in the east.