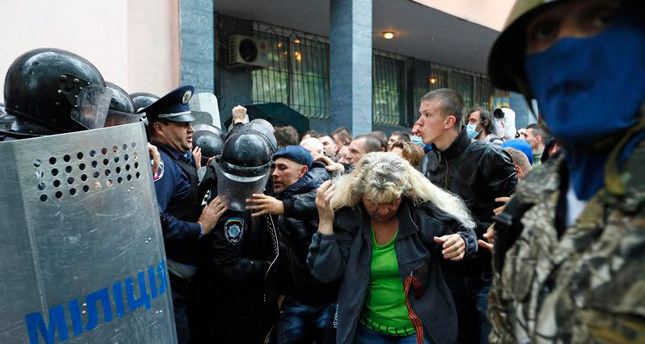 by AA May 05, 2014 12:00 am
DONETSK — Pro-Russian militants stormed a Ukrainian police station in Odessa on Sunday and freed nearly 70 fellow activists as the country's leaders lamented a police force they said was widely undermined by graft or collaboration with separatists.

Militants chanted "We will not forgive!" and "Russia!" as they smashed windows and broke down the gate at the compound two days after over 40 pro-Russian activists died in a blaze at a building they had occupied after clashes with pro-Kiev groups.

Some officers were offered the black and orange St. George's ribbon, a Russian military insignia that has become a symbol of the revolt, and were cheered by the crowd of several hundred.

Prime Minister Arseny Yatseniuk, speaking in the Black Sea port, was pointedly critical of the Odessa police: "If the law enforcement system in Odessa had worked not exclusively on the 'Seventh Kilometre' and had protected people, then these terrorist organisations would have been foiled," he said.

The Seventh Kilometre is an open market on the edge of Odessa, associated in the popular consciousness with the corruption and black market business that have blighted Ukraine's 23 years of post-Soviet independence.

Ukraine declared two days of mourning after the bloodshed on May 3 and the country's interim Prime Minister Arseniy Yatsenyuk said the police chief in Odessa had been fired over the deadly incidents.