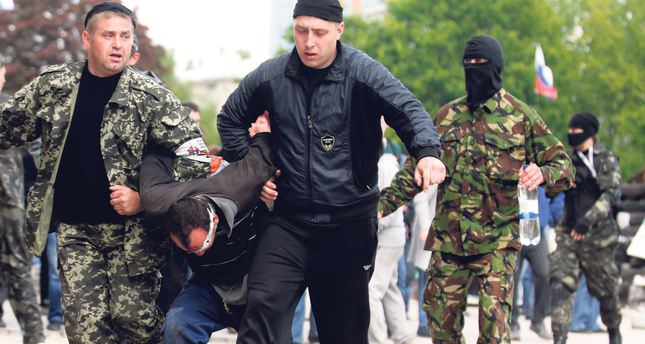 Meanwhile, the Ukrainian Interior Ministry said four paramilitary troops were killed in fighting on Monday with pro-Russian separatists near the rebel stronghold of Sloviansk in renewed violence Kiev is struggling to stop.

The sound of air sirens could be heard in the center of Sloviansk and a church bell rang in the main square. Gunfire seemed to be coming closer to the center of the town. Rebel fighters ambushed Ukrainian forces early Monday, triggering heavy fighting on the outskirts of the city of 118,000, Ukrainian Interior Minister Arsen Avakov said. "In the morning, a squad in the anti-terrorist operation was hit by an ambush by terrorist groups.

They are using heavy weapons," Avakov said in a statement from near Sloviansk. Kiev authorities describe pro-Russian separatists who seized control of a string of towns across the east of the country as "terrorists." The rebels for their part say they are defending Russian-speaking areas of the east against Ukrainian "fascists" trying to root out Russian influence in the country. The pro- Western government in Kiev on Friday started a fresh attempt to quash the rebellion, which it says is actively supported by Russia. Commanders say the Ukrainian army and Interior Ministry troops have fully encircled the city of more than 100,000 people.

Avakov confirmed that government forces took out a television tower in the southern suburb of Andreyevka. Acting President Oleksandr Turchynov promised in a TV interview on Sunday that the operation "will continue and bring results." However, Turchynov admitted that the operation was hampered by popular support for the rebels. "Let's face it: Citizens of this region support the separatists and this considerably complicates the anti-terror operation," he said on Ukraine's Channel Five.

Past government offensives in the region were thwarted by unarmed civilians stopping armored vehicles and soldiers' defections. Turchynov also accused Russia of waging a war against Ukraine and seeking to destabilize the country in the runup to the May 25 presidential elections.

At least 46 people were killed and more than 200 injured in clashes between pro-Russian and pro-Ukrainian protesters in the city on Friday.

Most victims died when a trade union building burned down after activists traded Molotov cocktails. The European Union said Monday that Ukrainian Prime Minister Arseniy Yatsenyuk and his government are to visit the European Commission in Brussels next week.

The visit on May 13 is aimed at supporting Ukraine in the long- and short-term "to undertake the political and economic reforms that are necessary for the country," the commission said.

The talks are to include a meeting between Yatsenyuk and European Commission President Jose Manuel Barroso. Swiss Foreign Minister Didier Burkhalter, who holds the country's rotating presidency and chairs the Organization for Security and Cooperation in Europe (OSCE), will hold talks with Russian President Vladimir Putin on Wednesday, his ministry said. Meanwhile, the Russian Foreign Ministry presented a report of human rights abuses in Ukraine to Putin. The "Whitebook," published on the Kremlin website in Russian and English, demands an end to the current "onslaught of racism, xenophobia, ethnic intolerance and glorification of the Nazis." It warned that otherwise there will be "devastating consequences for peace, stability, and democratic development in Europe."