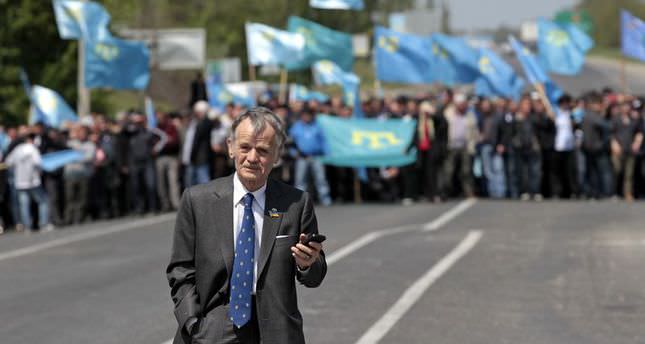 A statement from the foreign ministry expressed Turkey's concerns over a recent investigation launched by a Russia-appointed prosecutor against the National Assembly of the Crimean Tatar People citing "illegal mass activities" by Crimean Tatars after Kırımoğlu had been denied entry to Russia on Friday.

"We expect the legitimate representative body of Crimean Tatars to get the respect it deserves," it said.

On Saturday, Dzhemilev was denied entry into his native Crimean peninsula, a day after he was barred from entering Russia.

Mustafa Dzhemilev, also known in Turkey with his adopted surname Kırımoğlu, is the former chairman of the Crimean Tatars' national assembly and a current Ukrainian MP.

The Crimean Tatars — who experienced mass deportation to Central Asia in 1944 under Stalin's Soviet government -- pride themselves on having waged a successful campaign of passive resistance to Soviet authorities under the leadership of Dzhemilev.

In late April, Russian authorities had informed Dzhemilev that he was not barred from entering the country despite rumors to the contrary, but he said that before his departure from Crimea border guards informed him a ban was in place.