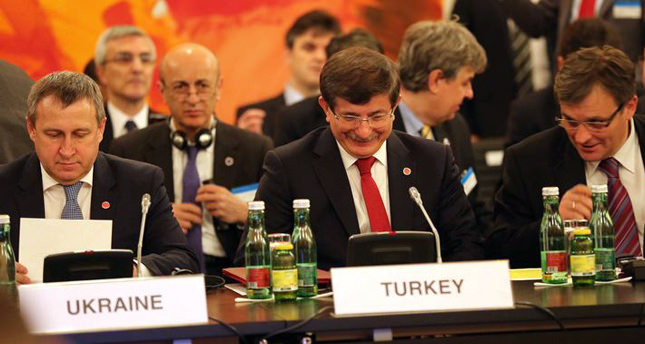 by AA May 07, 2014 12:00 am
VIENNA — Ukraine's unity and territorial integrity must be protected at all costs, Turkey's foreign minister said Tuesday.

"While protecting its unity, the Ukrainian government should take steps to make reforms that would give rights to all of its people with different ethnic and linguistic backgrounds," Ahmet Davutoğlu said in a Council of Europe meeting in Vienna.

He said the upcoming presidential election on May 25 could create an opportunity to make these reforms.

Regarding the situation of the Crimean Tatar community, the minister stressed that Crimea is the homeland of Crimean Tatars.

"Once upon a time when many of the peoples represented around this table were not inhabiting their current lands, Crimean Tatars were there in Crimea. Therefore, their rights must be looked after."

He also expressed his concerns over reports that Crimean Tatars' leader Mustafa Dzhemilev was denied entry to his native peninsula.

"Ukraine should not be divided into eastern, western, or pro-Europe, pro-Russian borders," Davutoğlu said.